Resources for Teaching and Learning About American Thanksgiving

American Thanksgiving is just one week away. I'm sure some readers are looking for a few resources to use in delivering short lessons on the history and traditions associated with the holiday. If you're one of those readers, here are some resources that I've collected over the last few years. 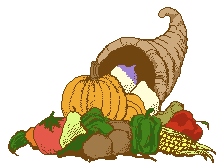 Where Does Thanksgiving Grow? is a neat data set produced by Linda Zellmer at Western Illinois State University. The data sets contain information about where the main ingredients in Thanksgiving meal come from. The data sets are displayed on maps showing you which states produce the most and least of each ingredient. For example, click on the turkey production data set and you will see that in 2007 Minnesota and North Carolina were the leading producers of turkeys. You can access the data sets individually or as a comprehensive PDF poster.

ABC Teach has numerous free lesson plans, coloring pages, and offline games that are designed for elementary school use.

PBS Teachers has two lesson plans/ sets of activities about Thanksgiving that correspond to a classroom viewing of the American Experience series We Shall Remain. You can watch individual episodes or the entire series here.

Last, but certainly not least, Larry Ferlazzo has an extensive list of Thanksgiving lesson resources. In general, if there is a holiday in the US, Larry has a list for it.
at 1:33 PM
Share

Starting in February 2012 Stanford University lecturer Nick Parlante will be conducting a free Computer Science 101 course. As you probably guessed by the title, Computer Science 101 is an introduction to the basics of computer science. The course requires no prior knowledge and does not require anything more than a modern web browser in order to participate. Learn more about the course from Nick Parlante himself in the video below.

Applications for Education
If you have high school students considering studying computer science in college, this course could be a good way for those students to obtain some good baseline knowledge about the field.
at 12:13 PM
Share
‹
›
Home
View web version