SoundCloud, one of my top five alternatives to Aviary, has just released a nice update to their iPad and Android apps. The apps already allowed you to make simple voice recordings on the go. Now the apps allow you to trim the timing of those recordings too. And on the SoundCloud Android app you can add fade-in and fade-out effects. The SoundCloud iPad app doesn't have the fade options, yet. 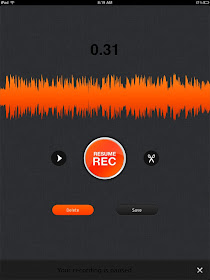 Applications for Education
As I wrote last month, SoundCloud and the SoundCloud mobile apps can be used by world languages students to record themselves speaking in the languages that they are learning. After creating their recordings students can share them with their teachers. Teachers can then use the SoundCloud web app to insert comments about their students' pronunciations directly into the recording.
at 8:33 AM
Share
‹
›
Home
View web version