The Guardian recently published a neat animation of British Royal Navy ship movements in the years just before WWI, during WWI, and the years just after WWI. If you watch the animation you'll notice shifts in the patterns of activity during the years depicted. The animation moves quickly and is not interactive so I had to watch it a few times to notice everything it depicts. The animation itself is neat, but what I actually found more interesting is the data that was used to create the animation. The animation was created using these ship logs. To see images of some the ships in the logs, visit this ship list. 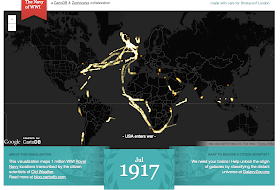 Applications for Education
When I saw the animation my first thought was to ask students to investigate why some routes were maintained during the war while others were abandoned. A good follow-up could be to have students try to investigate U.S. Navy ship patterns for the same time period.
at 7:41 PM
Share
‹
›
Home
View web version