Road to the White House Game, Maps, and Scholastic News

Scholastic's Election 2012 Q&A page offers short answers to common questions like, "what is a primary?" and "what is Super Tuesday?" After going over those questions and answers with your students they can test their recall of that information by playing the On the Road to the White House Game which is based on the Election 2012 Q&A. 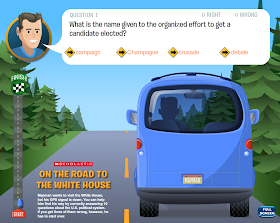 Here are some resources for teaching about the 2012 election that are appropriate for middle school and high school use:
How Candidates Raise and Spend Money
Election Lesson Plans from C-SPAN
Primary Elections and Gerrymandering Explained

H/T to Michelle Krill for the Scholastic Election 2012 link.
at 7:00 PM
Share

A Short Biography of Thomas Edison and Some Lesson Plans

In a case of YouTube's "related videos" suggestions actually being useful, after watching this video about the history of calendars, I discovered this short video biography of Thomas Edison. Even though the end of the video does reveal the producer's bias, the video does a nice job of explaining Edison's contributions to the conveniences of modern life.


Applications for Education
The video could be a good match for these Edison lessons offered through EDSITEment. EDSITEment offers four lesson activities that are designed to be used together, but with some slight modifications they could be used individually. The purpose of the EDSITEment lessons is to get students to investigate and analyze how Edison's inventions influenced life in the early 20th Century and how those inventions have influenced life today.

On a related note, if you're ever in the Fort Myers, Florida area, I highly recommend visiting the Edison & Ford Winter Estates.
at 5:00 PM
Share

The History of Calendars, Leap Year, and Daylight Savings

This year the child of one of my good friends will be celebrating his birthday on his actual birthday for only the third time. Why is this? He was born on February 29, of course.

Here are a couple of videos that explain the history of our modern calendar and why we have an extra day every four years.

This video was shot on February 29, 2008 which is why you here the narrator say "today is leap year." Four years later it is still a good, brief explanation of leap year.


And while we're on the topic of time, here are a couple of videos about daylight saving time.

H/T to Brain Pickings for the first video.
at 4:00 PM
Share

A Nice Primer on Google Apps for the iPad

Google Correlate - Discover Which Searches are Done When

Google Correlate is an interesting service that takes the concept of Google Trends and flips it. There seems to be two basic purposes of Google Correlate. The first purpose is to be able to determine patterns in the use of search terms over time. The second purpose is to compare the use of search terms according to location in the United States. One of the ways that you can discover this information is by drawing a graph over time then letting Google show you the terms that correspond to what you drew. Tekzilla has a video about this. I've embedded that video below.

Another way that you can use Google Correlate is by uploading your own data to analyze as search patterns over time and or location.

Applications for Education
I have to admit that at first I wasn't sure what to make of Google Correlate. The more I experimented with it and the more I thought about it, I realized that there could be a use for it in some academic settings. One way that you could use it in a classroom is to have students draw graphs, record the search term patterns, then investigate why certain search terms were popular at a particular point on the graph.
at 2:00 PM
Share
‹
›
Home
View web version