The NOAA Ocean Explorer is currently on an expedition to explore the deep-sea habitats and marine life of the northern parts of the Gulf of Mexico. You and your students can follow along on the 56 day exploration through live webcam feeds. You can also view recorded videos from the expedition.

NOAA has archived more than ten years of videos and images from past Ocean Explorer expeditions. For those past expeditions you can find multiple lesson plans to use in your classroom. You can also view archived video footage on the NOAA Ocean Explorer YouTube channel.

Humanline's images are available to educators and students for free re-use provided that the attribution guidelines are followed. There are two licensing agreements that users need to be aware of when attributing the works they're re-using. Those licenses are rights-managed and royalty-free. You do need to register as an education user to access all of the images for free.

Fetchnotes - Type, Text, and Tag Notes for Yourself

Fetchnotes is a new service for creating and keeping notes online. You can add notes to your Fetchnotes account by typing them on the web or by sending a text message to your Fetchnotes account. Organizing your notes is quite simple. When you write a note, just use a hashtag to label your note. Then whenever you want to search for a note just enter a hashtag. For example, if I was a student taking notes in a history course I might use the hashtag "#revolution" for all notes related to revolutions. Then I could go back and read all of my notes about revolution by just searching for that hashtag.

Applications for Education
Fetchnotes doesn't offer a lot of bells and whistles, but it is good for simple recording of notes. The service is still in beta. One of the features they're promising for the future is group notes which could be quite handy for classroom use. You could have all of your students contribute to a set of group notes by using the same hashtag when they write notes.
at 9:17 AM
Share

Last week the Royal Canadian Mint announced that they're ceasing production of pennies. It makes sense when you consider that it costs more than a penny to produce a penny. C.G.P. Grey has a nice video explanation of how the elimination of pennies will work.

Applications for Education
This video could be a good conversation starter. Ask your students to research other countries that have eliminated the penny and whether or not it has had an impact on those countries' economies.

Update: CNN Student News also has a short piece on the elimination of pennies.

9 Resources for Teaching & Learning About the Titanic

I was asked if I could share some resources for teaching and learning about the Titanic. I had a few things already in my archives. Then I did some searching and came up with handful of additional resources to add to the list. 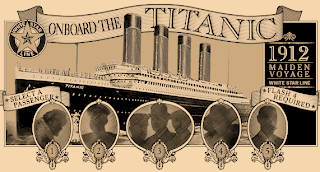 On Board the Titanic is a virtual field trip produced by Discovery. To take the field trip students select one of five characters to be as they set sail on the Titanic. When selecting a character the students do not know who they are or if they will survive until the night of the sinking. Students will spend four or five virtual days learning about the ship and their character. Only on the night of April 15, 1912 do they learn who they are and if they will survive.

From Snag Films and National Geographic, Secrets of the Titanic.

National Geographic is featuring the Titanic this month. One of the neat resources that they've put online is Unseen Titanic. Unseen Titanic has two galleries of interactive images of where the Titanic now rests under the Atlantic Ocean. The Crash Scene interactive gallery is a collection of artifacts found on the seafloor. Zoomified is the other gallery that National Geographic is featuring this month. The Zoomified gallery has four views of the submerged wreckage of the Titanic.

WatchKnowLearn has a collection of fifteen short videos about the Titanic. Included in that collection is this interactive timeline from History.com. The timeline starts with the construction of the Titanic and ends in 1913 with stories from survivors.

National Geographic XPeditions has a Titanic lesson plan designed for middle school use. The lesson plan includes the use of 3D animations of the Titanic as well as a study of ocean currents.

On Open Culture I found a video of what may be the only existing film footage of the Titanic. The footage was shot in a shipyard while the Titanic was under construction.

Estate of Hans Jensen v. The White Star Line is a mock trial in which the plaintiffs bring suit against the Titanic's operators for negligence. You can read through each part of the trial or you could use the framework to recreate the trial in your classroom.
at 7:00 AM
Share
‹
›
Home
View web version