The White House Shows You Where Your Tax Dollars Went

I have to admit that I am guilty of occasionally wondering where my tax dollars go. Now thanks to the White House's Federal Tax Payer Receipt I can find out.  I can enter the data from my actual tax returns, enter data that I estimate, or choose to use one of the "common scenarios" to see a breakdown of what my tax dollars will be spent on. The screenshot you see below is based on my selection of the scenario for a single person earning $25,000. 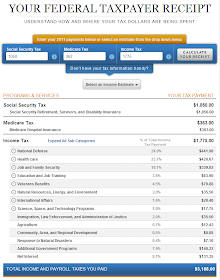 Applications for Education
The Federal Tax Payer Receipt could be useful for showing students how tax revenue is used by the federal government. This could be of particular interest to high school students who may have had their first jobs and first experiences with income taxes this year.

For more resources that you can use to teach students about income taxes please see Financial Literacy, Taxes, and Economics Lessons.
at 9:15 PM
Share

I've been playing with Instagram on my Android phone for a couple of weeks now. I even drafted a blog post about it, but scrapped it because I wasn't sold on whether or not Instagram could really be used for a lesson. Well this morning I watched the latest episode of The Infinite Thinking Machine and saw a story about a teacher using Instagram to have her students write and share short photo essays. Learn about that lesson and more in the episode of The Infinite Thinking Machine embedded below.

On Monday I published a list of Seven YouTube Channels Not Named Khan Offering Math Lessons. Thanks to three helpful readers I learned of three more good YouTube channels offering mathematics tutorials. Then I reminded myself that The New Boston which is primarily a channel for computer science lessons also has some good playlists of geometry, algebra, and basic mathematics lessons.

Math Doctor Bob's YouTube channel was suggested by a reader using the Disqus ID Npisenti. Math Doctor Bob offers nearly 700 video lessons on statistics, algebra I and II, calculus, geometry, and much more. The lessons feature Doctor Bob giving the lesson in front of a whiteboard so you see him and don't just hear his lessons.

Patrick JMT was suggested by Robert Borgersen who wrote, "Patrick JMT is HUGE, and equally good, if not better in some places, than Khan." Patrick JMT doesn't cover as many topics as Khan or Math Doctor Bob, but the videos are equally solid. I've included one of the Whole Numbers and Place Values lesson video below.

Ocean Tracks is an Australian website on which students can view the tracks of marine animals in an online 3D environment. The "tracks" part of Ocean Tracks shows you where in the world tagged animals are swimming or have swum. Ocean Tracks uses the Unity browser plug-in to provide animations of the underwater views of tracked animals. You can see what bluefin tuna, swordfish, sharks, and many other fish see in 3D. Watch the promo video below to learn more about Ocean Tracks.


Applications for Education
Ocean Tracks could be a great resource to use in marine biology lessons to show student how far some marine animals travel. Students will also enjoy seeing what those animals see. Those underwater views could be helpful in demonstrating to students why animals like sharks use their sense of smell to find prey.

If you do decide to use Ocean Tracks in your classroom, bear in mind that it is quite bandwidth intensive.
at 10:09 AM
Share

History Engine is an educational project developed by The University of Richmond for the purpose of giving students a place to explore stories of American life and publish their own stories based upon their research.

I was initially drawn to History Engine by the map and timeline that was featured on Google Maps Mania. The History Engine map allows students to search for stories by selecting a decade on the timeline then clicking a location on the map. Students will find stories about ordinary citizens making minor news in their communities as well as stories about famous Americans like George Washington. 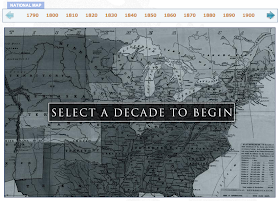 Applications for Education
History Engine provides an extensive guide for teachers who want to have their students research, write, and publish stories. History Engine offers an easy-to-follow style guide that students can use to format their writings. If you're looking for some good ideas and resources for getting students to use primary sources in their historical writings, History Engine is a website that you should give a good look.
at 9:37 AM
Share
‹
›
Home
View web version