Disclosure: ABCya! gives me money for groceries and dog food every month. Actually, they give me money for advertising. 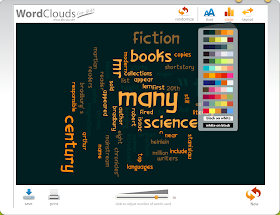 Applications for Education
A couple of years ago Tom Barrett started slidedeck of interesting ways to use Wordle in the classroom. The ideas presented by Tom and many other contributors can be applied to the ABCya! Word Cloud Generator.

Wikispaces is hosting a free online boot camp for educators interested in learning more about using Wikispaces in their classrooms. The webinar will cover the features, like project management, that are most popular with educators. The Wikispaces Boot Camp takes place next week on June 21 at 1pm Pacific Time. Click here to register.

Here's an overview of the scheduling function in Wikispaces.

I know that this post sounds a bit like an advertisement for Wikispaces and the boot camp is clearly a marketing vehicle for Wikispaces. That said, Wikispaces offers a free service that I have used since 2007 and I really like what they offer so I thought I would share this information.
at 8:24 PM
Share

Last month Weebly launched a new iPad and iPhone app. Today, they released 25 new templates and themes. Teachers and students using Weebly to build websites still get all of the great free website creation tools they love plus new themes and templates to enjoy. Furthermore, you can now use multiple page templates within your site. TechCrunch has a nice run-down of all of the news from Weebly. Watch the video below for a short overview of the new Weebly themes and templates.

Applications for Education
Weebly for Education includes all of the intuitive website-building and blogging tools found on Weebly plus features built specifically for education. Weebly for Education offers bulk creation of student accounts (up to 40 for free) which teachers can manage and moderate. Students can create their own websites and blogs using the accounts that you create for them. Unlike a lot of free services in the website building market, Weebly does not place any advertising your website.
at 7:59 PM
Share

Google Maps is Going Into the Woods

Today, was supposed to be the day that Google revolutionized mapping with the release of new Google Maps features. While their announcement today wasn't as exciting as I hoped, I was hoping for new map creation tools, they did unveil some interesting new things.

As someone who really enjoys spending time in the great outdoors (I live in a town of 650), I was happy to read that Google Maps Street View is taking to the woods. Street View Trekker is Google's new backpack-mounted equipment that will capture "Street Views" of trails in places like the Grand Canyon and other national parks.

Android users will be happy to learn that soon you will be able to Google Maps will be available for offline use on your devices.

Finally, new 3D imagery is being rolled-out for Google Earth and Google Maps. The imagery is based on the pictures captured by Google for use in their 45 degree views. The video below gives a good, quick demonstration of this imagery.

Kids Bowl Free in the U.S. and Canada This Summer

For the last few years bowling alleys across the US have given away hundreds of thousands of games of bowling to students. Kids Bowl Free is a program funded by bowling alleys to provide students with a safe and fun way to spend time during the summer (air conditioning is a nice too). Now the program has expanded to Canada.

To receive coupons for up to two free games of bowling per day, parents need to register on Kids Bowl Free. From there they can print coupons for free bowling. Each bowling center sets its own start and end date for the program so check the listings for a bowling center in your area.

Applications for Education
Kids Bowl Free is giving away school supply grants to teachers through the month of July. Click here to learn more and to apply for a $250 classroom supply grant.

Bowling To Teachers Grant Application 1 from Darin Spindler on Vimeo.
at 12:14 PM
Share

Last month I shared a post about a free iPad app called GoClass that allows you to create and deliver learning activities to your students that are using iPads. GoClass just released some useful updates to their free app.

GoClass is a free iPad application for creating short lessons and delivering them to your students. The lessons can include annotated images, free hand sketches, text, and video. GoClass gives teachers tools for creating class rosters that they can use to keep track of which students are using the lessons when. Teachers also have the option to ask questions and poll their students. After the students' response have been gathered teachers can project those responses without showing individual student's names.

Applications for Education
There are two new features of the GoClass app that you should note. First is an option to allow students to "favorite" items that you share. You can see students' favorite items as a way to see what students think are important aspects of a lesson. The second feature of note is the option to control the sleep mode on students' iPads.
at 12:03 PM
Share

EduClipper is a new venture from Adam Bellow. The purpose of EduClipper is to give educators a place to pin resources that they can share with other teachers and share with their students. Yes, it's a bit Pinterest-like, but it's focused on discovering and sharing educational materials. Learn more about EduClipper in the new explanatory video embedded below.

EduClipper isn't open to the public yet, but you can sign-up for beta access now. People attending some of my workshops this summer may be able to get an early hands-on experience with EduClipper too.

In the interest of full disclosure I will share that I have a very small, unpaid advisory role on this project.