Google+ Communities Makes It Easy to Create a Discussion Group


Google+ Communities will be rolled out to all users today, according to Google's announcement. As of 12:11pm I don't have access to it.

Applications for Education
My initial thought about Google+ Communities is that it could be a good tool for creating discussion groups for PTAs, creating a place for school boards to interact with their communities, and for extracurricular clubs to connect members.
at 12:16 PM
Share

A Short Explanation of Augmented Reality

I just published a post about a NASA iPad app that uses augmented reality technology. Just after I hit publish on that post it occurred to me that some readers are probably wondering what augmented reality is and how it works. Rather than try to write an explanation, I'll share Common Craft's excellent explanation.


If you're reading this in RSS or email, click here to see the video.
at 11:42 AM
Share 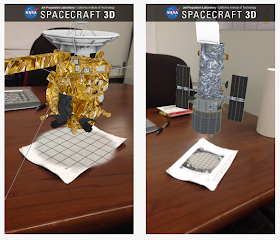 Applications for Education
Using Spacecraft 3D could be a great way for students to learn about the robotic spacecrafts that NASA is currently using to explore our solar system. I think that the app could be used by students of any age. That said, younger students may have trouble holding their iPad cameras on target while also manipulating the screen on their iPads. I say this only because I had that problem when I tried the app.

Squad is a neat code creation and editing service that I learned about Kelly Tenkely who has students in her school writing code. Using the free version of Squad up to three people can collaborate on the creation of new code. They can chat in realtime to help each other work through challenging problems. A searchable chat record makes it easy to go back in time to see how a problem was worked out in the past. 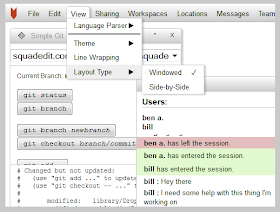 Applications for Education
I really encourage you to read Kelly's post about Squad and Codecademy which she used to teach her students to code. In short, Squad makes it possible to jump in and help students when they need it.
at 11:10 AM
Share

Create a Private Google Play Channel for Your School

Applications for Education
If students in your school are developing Android apps using the MIT App Inventor, distributing those apps through a private channel could be a good way for students to get feedback from teachers and students within your domain. If you would like to learn more about the MIT App Inventor please read my post about it here.
at 10:55 AM
Share

The Edmodo user interface was recently updated and my initial impression is that the home screen looks more like Facebook than ever before. The new home screen puts a feed of your students' activity in the right hand column, puts links to all of your courses in the left hand column, and puts tabs to access and manage courses at the top of your center column. This is just like what I see when I log in to manage my Facebook page for Free Technology for Teachers.

Click here for 15 ways that you can use Edmodo in your classroom.