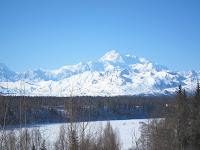 Thanks to The Adventure Blog over the weekend I learned that Denali - AKA Mt. McKinley - has been re-measured. The mountain is now listed 83 feet shorter than the previously accepted height measurement. Visit The Adventure Blog for the full accounting of the change.  Reading the article reminded me of another mountain measurement lesson that I shared last year. That lesson is included below.

Last night I started to read Mount Everest, The Reconnaissance 1921 which I downloaded for free from Google Books. In the introduction there is a three page explanation of the methods used to measure the height of Mount Everest. An explanation of the differences in measurements is also provided in the introduction. Part of that explanation includes differences in snow fall, cyclical deviations of gravity, and differences atmospheric refraction when observations were made. I'm not a mathematics teacher and will never pretend to be one, but reading that introduction did get me thinking about a possible mathematics lesson.

Applications for Education
Turn to pages 10 through 13 of Mount Everest, The Reconnaissance 1921 and read about the difficulties of accurately measuring Mount Everest in the late 19th and early 20th Centuries. It's interesting to note that most accepted measurements were more than 100 feet higher than today's accepted measurement. Tell your students that Mount Everest has shrunk over the last 100 years and ask them to solve the mystery of the shrinking mountain.

On a mildly related note and on a promotion of a Mainer note, Snow in the Kingdom: My Storm Years on Everest

by Ed Webster is one of the best books ever written about Mount Everest. If you enjoy good adventure stories and or stories about overcoming personal struggles, I think you will enjoy Webster's book. For my money, and I own two copies of it, it is far better than Krakauer's Into Thin Air.
at 9:43 PM
Share
‹
›
Home
View web version