Shutterbugs Wiggle and Stomp is a new educational game produced by the Smithsonian. The purpose of the game is to help children recognize the movements of animals. In the game children move through a virtual zoo with a zoo keeper. As they go through the virtual zoo the zoo keeper will ask students to take pictures of animals who are demonstrating running, jumping, stomping, and other movements.

Shutterbugs Wiggle and Stomp can be played online. The game is also available as a free iPad app. 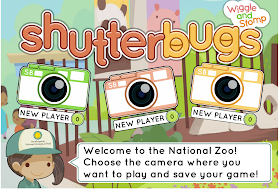 Applications for Education
Shutterbugs Wiggle and Stomp could be a fun little game for pre-K and Kindergarten students. The game reads the commands displayed on the screen to help students learn to read the words they're seeing. At the conclusion of the game students can print out coloring pages of animals they took pictures of during the game.
at 6:44 PM
Share
‹
›
Home
View web version