myHistro is a timeline builder and map creation tool rolled into one nice package. On myHistro you can build a personal timeline or build a timeline about a theme or event in history. Each event that you place on your timeline can be geolocated using Google Maps. myHistro timelines can be created online or you can use the free iPad app to create events on your timeline. Today, myHistro released a some new ways to share your projects. You can now export your timelines as PDFs, KML files (Google Earth format), or as a CSV file.

The slides below show you how to create timelines in myHistro.

Applications for Education
myHistro has a collaborative aspect as you can invite people to work with you on events or entire stories. To work with you your collaborators will need to register on myHistro. For students over age 13 myHistro has great potential for create digital historical stories.
at 5:02 PM
Share

Blockly is Google's web-based, graphical programming tool. Blockly is designed to get people developing small programs by dragging and dropping elements into sequence. Block can be used without knowledge of a programming language and without even touch your keyboard. Google Blockly's interface reminds me a lot of the MIT App Inventor which is based on code originally released by Google. Google Blockly, like the MIT App Inventor, uses jigsaw pieces containing commands that you can snap together to create an application. The blocks can be dragged, dropped, and rearranged as many times as you like.

The Blockly Turtle Graphics Contest invites you to "draw something cool" with the Blockly Turtle app. Submit your drawing and you could win $100 credit for the Google Play store. Entries will be accepted until midnight PST on April 1, 2013.

Applications for Education
Creating drawings for the Blockly Turtle Graphics Contest could be a good way to get students interested in using logic commands to create simple applications. Blockly is relatively easy to understand environment. Blockly doesn't require any typing, just clicking, dragging, and dropping with a mouse or on a touch screen.
at 4:37 PM
Share

Students Will Enjoy Creating Fiction Stories With These Story Starters 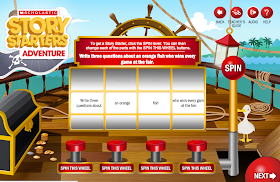 Applications for Education
Scholastic offers an extensive teacher's guide to Story Starters. Scholastic suggests addressing some of the following story elements through the use of Story Starters.


Thanks to Rich Kiker for sharing Story Starters on Google+.
at 4:12 PM
Share

This afternoon I stumbled upon a neat NASA resource that elementary school and middle school students might like. This interactive display gives students the opportunity to learn about six generations of the NASA space suits. Clicking on one of the space suits gives students a short history of why that suit was developed, its unique parts, and how it functions. The introductory animation to the display explains to students why astronauts need to wear space suits and what would happen if they didn't wear a space suit.

Applications for Education
In exploring the history of the space suits students can learn a bit about atmospheric pressure, friction, and this history of the U.S. space program.
at 3:03 PM
Share

Readium is a free Chrome extension that enables you to view ePub files in your browser. To read an ePub in Readium you can import the file from your computer or insert the web address of an ePub file that is hosted online. You can store the files in Readium to build a library. To make reading online as easy as possible Readium provides options for changing font size, altering font and background colors, and changing the page format.

Applications for Education
Readium could be a good good tool to have installed on your school's library computers or computer lab computers. When students are conducting research and encounter an ePub document, they will be able to access it without the need to send it to an ereader device.
at 9:46 AM
Share
‹
›
Home
View web version