Edcanvas is a free service for creating and sharing with your students collections of educational materials. Edcanvas makes it easy for teachers to organize and share educational materials in a visually pleasing format. The "canvas" part of Edcanvas is where you arrange videos, links, images, and files around any topic of your choosing. Edcanvas has built-in search tools so that you do not have to leave your Edcanvas account in order to locate resources. The service has impressed me since its launch earlier this year and throughout its continuous updates. The latest update to Edcanvas includes the option to create and share quizzes.

You can now create multiple choice quizzes for your students to take while viewing the materials you have shared with them. Watch the videos below to learn how to create quizzes in Edcanvas.


Applications for Education
Edcanvas is an excellent tool for creating digital packets of information for your students to read, watch, and listen to. Now you can have students check their understanding of the materials in those digital packets by having them take a short quiz.
at 10:19 PM
Share

H/T to the Google Operating System blog.
at 10:08 PM
Share

Is This the Future of Field Trips?

Everyday I see a new story about Google Glass. I think that it's neat, but I'm not ready to shell out $1,500 for it nor do I think we'll see it in classrooms anytime soon. That said, I couldn't help but be intrigued by this video from Google about a teacher using Google Glass to take his students on a virtual field trip to CERN. Watch the video below.


What do you think? Is this the future of field trips? Can you see Google Glass being used in your lessons?
at 9:39 PM
Share Here's a handy trick that I picked up from the Google Drive Google+ page today. If you are using Google Drive on your PC or Mac desktop you can now just right-click on a file in your Google Drive folder to share it. This isn't a major change to Google Drive, but if you use the desktop client frequently you might find this method useful. 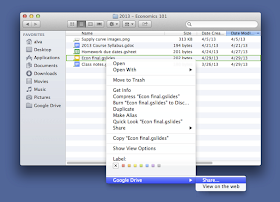 5 Things I Like About Building a PLN on Google+

Due in part to the fact that anyone who has a Google Acccount has a Google+ account, Google+ claims more users than Twitter. But based on the response when I speak at conferences about personal learning networks and social media in general, it appears that Google+ is one-tenth as popular as Twitter among educators. I hope this changes over the next year because I think that Google+ has some features that many educators will enjoy.

Discovery:
One of the things that educators often say to me about Twitter is that they don't know who to follow or how to find people to follow. Twitter does make suggestions about who to follow, but the suggestions made to the first-time user who is looking to connect with other educators are non-existent. Twitter also gives you the option to connect with people in your email contacts too. That's about where it ends for obvious, built-in discovery tools on Twitter.

Google+, of course, will pull-in your Gmail contacts for you to use to connect with other people using Google+. To get beyond the people to whom you are already connected, hit the "communities" button on your Google+ homepage and search for a community to join. For example, search for "education," "teaching," or "educational technology" communities and join an open community. Then start to connect with others in that community. In just a few clicks you can be involved in a community of dozens or hundreds of other educators on Google+.

Circles:
I have a half-dozen or so circles at the moment. Creating circles allows me group my contacts according to any criteria that I like. For example, I have a circle of just my family and a circle for just friends in Maine. There are some things, like pictures of nieces, I don't want to share with the whole world so I'll share just with those in my family and close friends circles.

Following conversations:
One of the things that I often hear from teachers who have tried Twitter and given up on it is, "I couldn't keep up with what was happening."

I find it far easier to follow conversations on Google+ than on Twitter. I don't spend all day and night on Twitter which means that sometimes people reply to something I said hours or days ago and I have lost the context for their messages. In fact, this happened to me this morning. Someone replied to something I Tweeted on Friday and another person jumped into the conversation. This all happened two hours before I was awake so when I got on Twitter I had to go back through a dozen messages to find out what they we're talking about and why I was mentioned in their Tweets.

On Google+ when people reply to something that I've posted I always see what prompted their comments. It doesn't matter if what they're responding to was posted two hours ago or two weeks ago, I always see their comments tied directly below my original post.

Visit the official Google+ help pages for a complete guide to getting started with Google+.
at 10:34 AM
Share

When was the last time you changed your email password, your Facebook password, or your online banking password? Hopefully, you're not using the same password for all of your accounts. If it has been a while since you changed your passwords, think about doing so as part of digital spring cleaning. The videos below provide some guidance on creating strong passwords.

Here's a set of three videos to get you started. The first video is a fun look at the ten most commonly used passwords, don't use these.