VideoANT is a free tool for collaboratively annotating videos. I first wrote about VideoANT back in 2010. Recently, as I learned from Nathan Hall, VideoANT received a major facelift that makes it easier to use than it was before. The first improvement to note is that the service is now built on HTML5 which means that Flash is no longer needed. The second major improvement is improved ease of annotating videos.

Nathan Hall wrote a complete run-down of all of the features of VideoANT. He also posted a how-to video. I recommend reading his post and watching his video here.

Applications for Education
In the past I've used back-channels while my students are watching videos so that they can discuss the footage as they're seeing it. Annotating videos with Video ANT could take that process a step further by creating an archive that matches the various points in the footage.
at 7:30 AM
Share 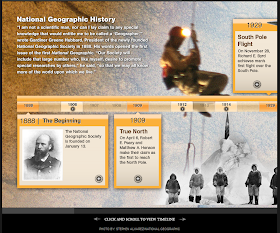 Applications for Education
These timelines of exploration aren't terribly detailed but they could be good resources to use as introductions to their respective topics. Use these timelines as starters and ask your students to improve upon them with their own research.
at 7:00 AM
Share

A Bunch of Lessons About Bears

From the department of "yes, Richard lives in a rural area," yesterday afternoon as I was driving home from the bank a young black bear ran right in front my truck. (My truck did not hit the bear and it ran away before I could get a good picture). In the past I've shared resources about Polar Bears, Black Bears, Brown Bears, and Panda Bears, but I've never put all of those resources in one place until now.

The Wildlife Research Foundation's Meet Our Bears website features a live bear den webcam and archived videos about Maine's Black Bears. In addition to the videos, the website offers some basic information about the lives of Black Bears. Hopefully, in the future there will be more educational content added to the website. For now though the site is a good place to see some bears in their natural habitats. And from the "don't try this at home" department, here is a video of the researchers checking on a bear in her den. The Wildlife Research Foundation also has a video of a bear giving birth to twin cubs.


The August 2011 issue of National Geographic magazine featured a cover story about the "Spirit Bears" of British Columbia. "Spirit Bear" refers to the Black Bears that are white in color due to a recessive trait called Kermodism. As always the National Geographic website has some neat resources to support the main article. One of the online resources for the Spirit Bear article is a Punnett Square that explains how two black Black Bears can produce a white Black Bear.

The National Zoo app for Windows 8 features live webcam feeds of panda bears, lions and their cubs, tigers, cheetahs, and fish. Because these are live webcams sometimes you'll see the animals and sometimes you won't. If the webcam feed isn't showing the animals when you're viewing it you can switch to the gallery of still imagery.

Bear Tracker is a feature of the Polar Bears International website. The Bear Tracker plots the travels of collared polar bears in Hudson Bay and the Beaufort Sea north of Alaska. You can view the travel paths of one or all of the bears on each map. The map also offers play the travel paths recorded over time.

Polar Bears International has some lesson plans for teaching about climate change, ecotourism, and conservation. You will also find links to a slideshow on Polar Bears and nice PDF about Polar Bears that contains an educational game. And if you would like to show videos of polar bears to your students, Explore.org has polar bear footage that you can watch here.

WWF Together features interactive stories about endangered animals around the world. Each of the interactive stories includes beautiful images and videos, facts about the animals and their habitats, and the threats to each of the animals. The animals currently featured in the app are pandas, marine turtles, elephants, tigers, polar bears, bison, whales, gorillas, rhinos, and snow leopards. Stories about sharks and jaguars are slated for addition to the app later this year.
at 6:00 AM
Share

Check Out the New Look of the Google Art Project


Applications for Education
The latest version of the Google Art Project includes an option to compare two works of art. There is still an option to create your own artwork collection while visiting each museum. Have your students combine the use of these tools to compare works of art as part of analysis/ critique assignments.
at 5:30 AM
Share
‹
›
Home
View web version