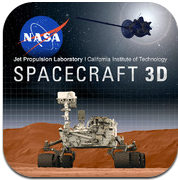 Create 3D, augmented reality stories with ZooBurst. ZooBurst is an amazing service that allows you to create a short story complete with 3D augmented reality pop-ups. Students could use ZooBurst to create short summaries of books that really jump off the screen. ZooBurst offers an iPad app to complement the web-based version of the service.

The Getty Museum offers a neat way to view art through augmented reality. As employed by The Getty, augmented reality creates 3D displays of art from printed PDF codes displayed in front of a webcam. The example that The Getty provides in the video below is a 3D display of one of the cabinets of curiosities created by Albert Janszoon Vinckenbrinck. If you want to try it for yourself after watching the video, the directions are available here.


Fetch! Lunch Rush! is a neat use of augmented reality to create a mathematics lesson for young students. The free iPhone app (it also worked on my iPad 2) was developed by PBS Kids. The purpose of the app is to get kids moving about a room in search of numbers that are the correct answer to the questions posed to them on the app. Students read the arithmetic problem on the app then search out the correct answer. When they think they have found the correct answer they scan it with their iPhones or iPads to find out if they are correct or not.

Star & Planet Finder enables you to locate the planets and stars in the night sky through your  iPhone or iPad. To use the app, select from a list the planet or constellation you want to locate. Star & Planet Finder will then give you directions to move your iPhone or iPad until you can see through the camera display the planet that you're looking for. The free version of the app only identifies planets. For $.99 each you can add lists of constellations, lists of satellites, and lists of brightest stars to the app.
at 10:30 AM
Share

Timelines.tv is a nice little resource for history teachers to bookmark and share with their students. On Timelines.tv you can find six timelines of important eras in U.S. and European history. Each timeline includes short (3-10 minute) videos about people and events in the era. The timelines also include pictures and short text descriptions. The six timelines currently available are A History of Britain, The American West, Medicine Through Time, American Voices, The Edwardians, and Nazi Germany. More timelines appear to planned for publication in the future.

Applications for Education
The timelines that I looked at weren't the most comprehensive timelines I've found, but the videos that I watched were good. Timelines.tv could be a nice resource to share with students as a tool to review an era after you have taught some lessons on it.
at 10:00 AM
Share

Best of 2013 So Far... Virtually Hike the Grand Canyon

Last fall Google announced that it had a team setting out to capture "street view" imagery of trails through the Grand Canyon. Today, the first batch of that imagery was released. You can now explore more than 75 miles of trails in the Grand Canyon in Street View (I think they should call it Trail View). Get a taste of the imagery in the video below then start exploring the new Grand Canyon imagery.


Applications for Education
One of my former colleagues used to teach an entire unit on geology by walking students through the Grand Canyon with pictures she had taken. The new Grand Canyon Street View imagery will enable more teachers to use the same model for teaching geology.
at 9:30 AM
Share

Applications for Education
My first thought when I saw VideoNotes was that it would be a great tool for students to use to take notes, ask questions, and answer questions while watching "flipped" instruction videos. You could assign a video for homework and have your students ask and or answer questions using VideoNotes. Have students share their notes with you so that you can see their questions which in turn can influence how you structure your next lesson plan.
at 9:00 AM
Share

A Helicopter Design Contest for Kids

Submissions are now being accepted for the 3rd annual Sikorksy Helicopter 2050 Challenge. This contest asks students to design the helicopter of the future. Submissions are judged based on uniqueness of concept, description of the idea, and the potential of the design to overcome challenges. The winning design receives a scholarship from Sikorksy and a trip to Sikorsky headquarters. Contest submissions will be accepted through September 20, 2013.