Applications for Education
The Google Cultural Institute's Eiffel Tower exhibit has potential uses in a variety of classrooms. Obviously, students studying French culture and history can benefit from exploring the exhibit. Students learning about engineering and construction methods can also benefit by exploring the exhibit.
at 10:25 PM
Share

Organize Your Thoughts and Tasks With Thought Boxes

You can rearrange the boxes in each of your trains in your Thought Boxes account by just dragging and dropping them into place. The free version of Thought Boxes does not allow you to share your trains with others.

Thought Boxes doesn't have to be used for to-do lists. Students could use Thought Boxes to create an outline for essays they're writing or a video they're producing. Being able to drag and drop boxes into a sequence makes it easier for students to quickly rearrange their thoughts to fit the needs of their outlines.
at 4:32 PM
Share 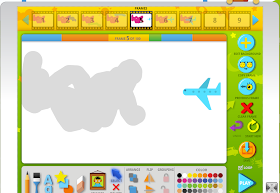 Applications for Education
ABCya Animate could be a great tool for elementary school and middle school students to use to create animations to use to tell a short story. For example, the animation that I started in the picture above could be the beginning of a short story about flying to visit grandparents. To complete the story I would add some drawings to represent my family and perhaps some text for clarification. Your students might also use short animations as part of larger multimedia project.
at 4:16 PM
Share

How to Create Flipped Classroom Assignments & Videos With Knowmia

Knowmia is a website and an iPad app for creating, sharing, and viewing video lessons. Last month Knowmia introduced a new feature that they call an Assignment Wizard. The Knowmia Assignment Wizard allows teachers to design assignments that their students have to complete after watching a video. Students can check their own Knowmia accounts to see the assignments that their teachers have distributed.

And if you're not using the flipped model, Knowmia can be a good place to find educational videos that your students can use to review or get "on demand" help when they cannot connect with you.
at 3:52 PM
Share
‹
›
Home
View web version