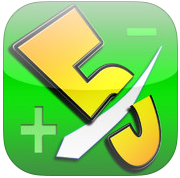 Math Slicer is a game that offers a fun alternative to using flashcards to practice basic mathematics skills. Math Slicer is available as an Android app and as an iOS app.

In Math Slicer students are shown addition, subtraction, multiplication, and division problems that they have to answer by “slicing” the correct answer in half. The answer choices jump up on the screen and students have to slice them before they disappear.

Before the start of each round of Math Slicer students can select the type of problems that they want to practice. Students can also select the speed with which the problems and answer choices appear on their screens.