Most students and adults only think of satellites and space shuttles when we think of NASA. NASA @ Home and City might make you think about NASA a little bit differently than you have in the past.

NASA @ Home and City is a virtual tour of NASA-related science in our homes and cities. Students visiting NASA @ Home and City can rotate buildings and take a look inside to discover everyday items whose development has been influenced by technology developed at NASA. Each item within a building has a narrated explanation of how that items was influenced by NASA technology. For example, students can take a look inside the bathroom of a house to learn how cosmetics have been influenced by technology used at NASA. 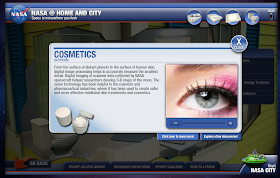 Applications for Education
NASA @ Home and City could be a great way for students to see that science, particularly space science, is all around them even when they don't realize it.
at 10:01 PM
Share
‹
›
Home
View web version