A History of Immigration in the United States - A Multimedia Timeline

A couple of weeks ago I reviewed a great new service for creating multimedia timelines. That tool is called Hstry. Through the Hstry platform you can create timelines that include videos, images, audio, text, and quiz questions. It is possible to add instant feedback on the quiz questions in your timeline. To get a sense of how Hstry timelines function, take a look at one of their recent featured timelines about the history of immigration in the United States. 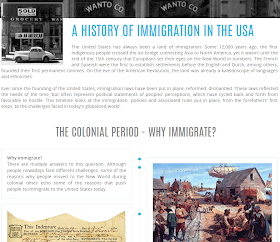 Applications for Education
A History of Immigration in the U.S.A. ends in 1965. A good assignment for students would be to develop continuations of the timeline to cover 1965 through today. Those timelines could include video clips of Presidents and other politicians discussing issues around immigration policies.