Add Your Voice to Diagrams By Creating TinyTap Sound Boards

Parts of this post originally appeared on my other blog, iPadApps4School.com

TinyTap is a great iPad app for developing your own educational games. I've been a big supporter of the app since it launched a couple of years ago. TinyTap has always been targeted toward the K-3 crowd, but it can certainly be used with older students too. To reflect that TinyTap has uses in older grades, the developers gave the app a bit of a facelift and added some new features.

TinyTap still works the way that it always has, but some of the decorations and animations that were included to appeal to young students are optional rather than default settings.

To create a game on TinyTap you upload pictures or take new pictures and arrange them into a set. Then select each image to create questions about it. To create your question press the record button and start talking. When you have finished talking select a portion of your picture to serve as the answer. I created a small game about objects in my house. I took four pictures of things in my house. Each question asked players to identify the objects in my house. For example, when a player sees a picture of my kitchen he or she has to identify the tea pot by touching it.

The feature of the updated TinyTap app that I like the best is the Sound Board option. A Sound Board is an image or set of images to which you add your voice. To create a Sound Board you highlight elements of a picture then record yourself talking about those elements. When a student views your Sound Board he or she can tap on highlighted portions of the image to hear you talking about them. This could be a great option for creating a narration of a flowchart or a diagram. 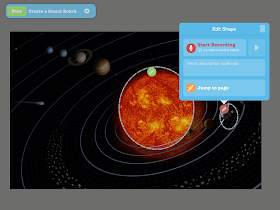