Aurasma is a free app for iPads, iPhones, and most Android devices. Using Aurasma you can create augmented reality layers, Aurasma calls them "auras," that pop-up when you scan objects with your phone or tablet.

This afternoon at the BETT Show I saw James Pollock give a nice presentation about Aurasma which I've been playing with for a couple of years. I like going to presentations like Mr. Pollock's because it gives me an opportunity to see how others are using the same apps that I love. One of the uses of Aurasma that he showed that I really liked was creating Aurasma auras that served as the jumping-off point for review activities. The demonstration that James Pollock gave was having students scan an explanatory diagram with their iPads. When they scan it an "aura" pops-up on their iPads. The aura has three boxes students can tap to indicate if they understand the content, don't understand it, or somewhat understand it. The students' choices send them to a new resource for either review or further challenge.

Watching what Mr. Pollock's students are doing with Aurasma prompted me to think about using multiple part Aurasma auras to create augmented reality choose-your-own-adventure challenges. Through the sharing of Aurasma auras your students could create a multiple part story about historical artifacts, landmarks, and models. Then as viewers of the story scan each item they can jump to different videos or webpages based on their choices in the auras. Watch the video below for a basic overview of the Aurasma aura creation process.

What a Cloakroom Can Teach Students About Web Search Strategies

I’m currently in London, England for the BETT Show and TeachMeet BETT 2014. As is the case with most flights going to Europe from the east coast of the U.S. my flight left in the evening and arrived in London in the middle of the morning. This meant that I was too early to check into my hotel. I knew this ahead of time and figured that I could probably check my luggage at the ExCel Conference Center where the BETT Show is being held. I wanted to confirm this ahead of time so I spent some time searching on the BETT and ExCel websites for “coat check,” “bag check,” “coat room,” and “bag storage” in the hopes of confirming my assumption. My searches were fruitless.

Eventually I confirmed my assumption about a baggage check when I stumbled upon a map of the conference center. In browsing around the map I discovered a “cloakroom.” When I hear “cloak” I instantly think of the Count Chocula character from the cereal boxes of the 1980’s (my mother never let us eat that kind of cereal despite our pleas). I never thought to use the word “cloak” in any of my searches for information about storing my jacket and small bag for the afternoon. Cloak is just not a regular part of my American vernacular.

I have no doubt that students sometimes run into roadblocks in their searches for the same reason that I didn’t find anything in my searches; we’re stuck in our own vernacular. Had I used a thesaurus when I got stuck, I probably would have found the word cloak and confirmed my assumptions about checking my luggage for the day. The lesson here is when your search has hit a roadblock, try a thesaurus to find words that might lead you to better search results.
at 2:04 PM
Share 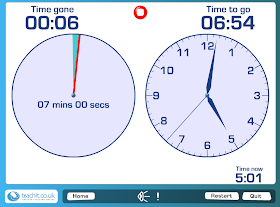 Applications for Education
Whenever I have long blocks of instructional time I like to break it up with short breaks and or timed hands-on activities. One tool that can help to prevent the students and me from stretching the "break times" is to use a countdown timer like Teachit Timer.
at 6:30 AM
Share
‹
›
Home
View web version