Canvas Mol is a website that provides 3D, interactive, rotating models of simple and complex molecules. There are more than fifty models of relatively common molecules like glucose, fructose, and morphine. Each model can be altered to show or not show bonds, to show or not show individual atoms, and to rotate on the X,Y, or Z axis. Canvas Mol works best in Chrome or Opera, but it can also be used in Firefox and Safari.

Applications for Education
Canvas Mol could be a great resource for chemistry and biology teachers and students. Teachers can manipulate the models to include or not include all parts of the model. Teachers could choose to not display one element of the model and challenge students to identify the molecule.
at 6:13 PM
Share

The Mathematics of Rock Climbing

The Math of Rock Climbing is a neat video that could be used to incorporate a mathematics lesson into a physical education class. The high school in my district has a ropes course that the students use during physical education classes. If your school has the same or there is a rock climbing gym in your area that you can take students to, you have an opportunity to have students physically experience mathematics. Watch the video below.

Go Social Studies Go is a nice site developed by Kenneth Udhe, a social studies teacher in Michigan, for his students and the world. Go Social Studies Go is essentially a series of multimedia books about common social studies topics. The site is divided into three main sections; U.S. History, World History, and World Religions. Click to open a book then click to open a chapter in the each of the books. Within each chapter there is a series of pages containing text, pictures, videos, and links to additional resources on your chosen topic.

Applications for Education
Go Social Studies Go could be an excellent resource for middle school social studies teachers. For the topics covered, there is as much content area information as you'll see in a typical textbook plus your students can access multimedia elements for the topics they're reading about. For high school students, the Go Social Studies Go content offers a nice refresher on many topics.

Disclosure: Go Social Studies Go is currently an advertiser on Free Technology for Teachers. That said, I initially wrote about the site three years ago when I was using parts of it with my own students.
at 6:01 PM
Share

Fun With Art - The Getty Games

Getty Games is a nice collection of art-based games produced by The Getty Museum for younger students to enjoy. There are four categories of games, each offering a subset of games. Getty Games also offers directions for a selection of offline activities.

The four game categories offered by Getty Games are Detail Detective, Match Madness, Switch, and Jigsaw Puzzles. In Detail Detective players are shown four small pictures and have to identify which of those four came from the larger piece of art shown to them. Match Madness offers four games in which players match either match two parts of a picture together or match exact images. In Switch players are shown two pieces of art side-by-side and have to identify the parts that have been switched or altered. There are twelve jigsaw puzzles available on Getty Games. The neat thing about them is that players are shown the completed artwork and then choose how many pieces they want to have to put together to reassemble the artwork. 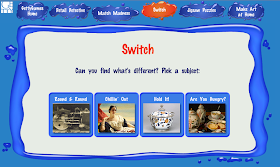 Applications for Education
Playing the Getty Games could be a nice way for students to review artwork they saw while exploring art online at The Getty.
at 5:49 PM
Share

Now You Can "Go Back in Time" In Street View

For years now we've been able to look at historical imagery in Google Earth by using the time slider. Now a similar feature is available in Google Maps. As announced on the Google LatLong blog, now when you're viewing an image in Street View you may see a little clock icon in the upper-left portion of the screen. When you see a clock icon while viewing a Street View image you can click the icon to roll-back the view to a previous image. Google began publishing collections of Street View imagery  in 2007. The number of images available will vary from location to location.

Applications for Education
Going back in time with Street View imagery could be a good way for students to see how some places have changed over the last seven years. This could be particularly useful when looking at locations that have suffered some type of natural disaster like a flood or earthquake. For older imagery on Google Maps, take a look at History Pin.
at 5:36 PM
Share
‹
›
Home
View web version