If This Then That - Automate Routine Tasks

If This Then That is a helpful website for automating many routine online tasks. If This Then That helps you automate tasks like saving your Pinterest pins to your Evernote account, setting text alerts for calendar events, and sending email attachments directly to your Dropbox account. There are thousands of formulas, "recipes" is what IFTTT calls them, available in the gallery of recipes. The recipes are all contributed by the community of IFTTT members and you can contribute too. You can browse channels of recipes that are based on the use of popular services like Gmail, Dropbox, Evernote, Instagram, and Google Drive. Click here to see the hundreds of recipes that incorporate Google Drive functions. 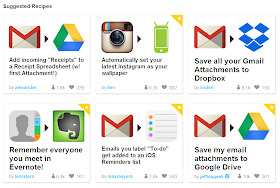 Applications for Education
I don't know of any teachers who couldn't use a little more time in their days. If This Then That won't give you more time in the day, but the recipes could help you automate some tasks and free up time for other things in your day.
at 6:41 PM
Share

The Week in Review - The ISTE Edition

Good afternoon from the ISTE conference in Atlanta, Georgia. I've had a great couple of days connecting with educators from all over the world. The best aspect of conferences like this is getting to learn from other educators. Yesterday, I shared a cool idea that I picked up from Jen Roberts at the conference. Next week I'll share some other ideas that I picked up here at ISTE 2014. If you would like to see what others at ISTE 2014 are sharing, check out #ISTE2014 on Twitter and or Google+.

Here are this week's most popular posts:
1. How to Send Emails from a Google Spreadsheet
2. Find Primary Sources from All Over the World on the World Digital Library
3. Why Book Trailers Are Great Alternatives to Traditional Book Reports
4. Students Can Create Nice Explanatory Videos on Shadow Puppet Edu
5. 19 Educational Games About U.S. Civics
6. Google Announces a New Version of Google Drive
7. A Few Widgets To Consider Adding To Your Classroom Blog

Three seats are left at the Practical Ed Tech Summer Camp. Seats are still available for my online course Getting Ready for GAFE (start dates in July and August).

Create and Share Short Stories With Story Builder from Google

Here's another neat thing that I learned about from Jen Roberts. On Back in March on her blog, Literacy, Technology, and Policy she shared how she has students use Google's Story Builder tool to create short stories. Through Story Builder you can create a short story that appears to be written by multiple editors but is really written by just one person. I used it to create a short story about conversations in my house. On her blog Jen shared examples of her students' stories including a neat demonstration of using Story Builder to tell a story about using proper punctuation. I encourage you to read her post in which she includes some helpful planning tips for teachers. 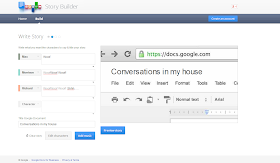 Applications for Education
I used Story Builder to create a story that had three characters typing instead of talking. In this manner the Google Story Builder tool could be useful for illustrating short sections of dialogue in a larger story that your students are developing.
at 10:30 AM
Share

A Tour of CDW and an HP EliteBook

Last month CDW invited me to tour their facilities just outside of Chicago. Actually, they bribed me to attend by promising a free HP product. The product was an HP EliteBook. This is this is my summary of the experience. In other words, this is a sponsored post.

As someone who used to work in FedEx facilities I found touring the CDW warehouse an interesting experience just from an industrial engineering perspective. The aspect of the facilities that will matter to school districts is the department that handles imaging of computers for customers. Customers (schools, businesses, non-profits) can have CDW handle all of their computer imaging for them. CDW will keep a record of the image on file for customers so that they can call, order a new computer, and have it shipped out with an image installed and ready to run. Customers can even order separate images for different user groups. For example, a school district could order an image for teacher computers and an image for student computers. This service could free up IT staff in a district to do other tasks instead of imaging or re-imaging computers over the summer.

The HP EliteBook that I have been using for the last month is the Folio 1040 model with an i5 processor and 128GB solid state drive. The display is a 14" low-glare matte display. The track pad is a multi-touch track pad that you can use to pinch and zoom on objects on your screen.

With the exception of a couple of keynote presentations (I did not want to bother converting my Keynote files to PPT) and a few webinars, I have made the HP EliteBook my primary computer for the last month. The battery life has been outstanding on the EliteBook. I took it on four transcontinental flights and used it for the entire flight with plenty of battery life to spare. Yesterday, I used it all day at Hack Ed 2014 and then used it for two more hours in the evening before having to plug it in. Granted, I was mostly using it for web-based tasks and not doing heavy video editing which would suck up more battery life, but I still find the battery life impressive.

The back-lit keyboard makes the EliteBook easier for me to type on than my Lenovo Yoga of similar size and hardware specs. The matte display is not as crisp as what I find on the Yoga or on a retina display MacBook. That said, the matte display is easier on my eyes when typing for a long a period of time. Speaking of the Lenovo Yoga, the EliteBook is a more rugged machine as I found out when I dropped it off of an airline tray and again when it got squished by someone reclining her seat on a flight to Chicago last week. Why am I comparing it to the Yoga? Because that is the other Windows laptop that I have in the "ultrabook" category.

My bottom line on the HP EliteBook is that if you're in the market for a Windows-based ultrabook, you can't go wrong with the EliteBook. Will it stand-up to the physical torture a middle school student puts a computer through? Probably not. Would a college student, teacher, or perhaps a high school teacher like the EliteBook? Definitely.

DISCLOSURE: CDW paid for my travel and lodging during this event. I received a product for consideration from CDW. All opinions within this article are my own and not subject to review or edits by CDW or its partners.
at 6:30 AM
Share
‹
›
Home
View web version