How to Use Padlet to Manage Tasks

Padlet is one of my favorite web tools because it can be used in many ways for many purposes. Today, I used it to have teachers share the things that they created during my workshop. In the classroom I have used it as a digital KWL chart. This afternoon I noticed that Padlet offers a wallpaper titled "My Tasks." If you select "My Tasks" as your Padlet wallpaper you can use Padlet to keep track of tasks on your to-do lists. The wallpaper has three columns; "to do," "in progress," and "done."
Applications for Education
Using the "My Tasks" wallpaper on Padlet could be a good way for students to organize tasks when they are working on group projects. On a shared wall students can move their to-do notes from one column to the next as they progress through their group projects.
at 6:05 PM
Share 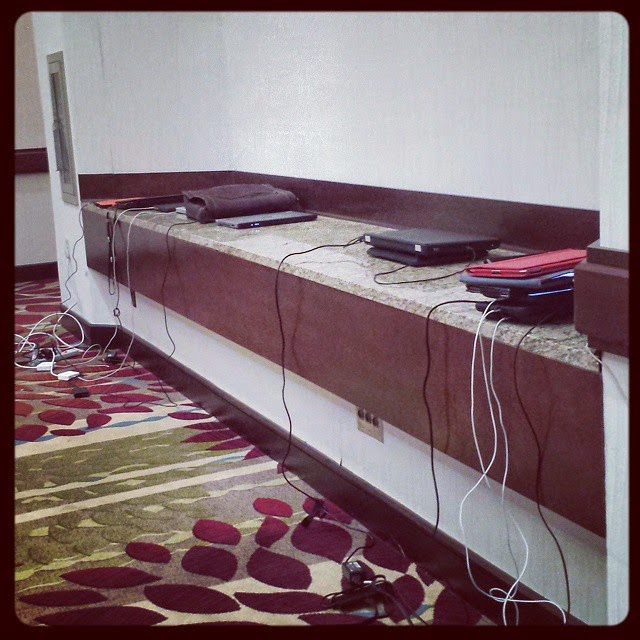 Good evening from Greensboro, North Carolina where I spent the day facilitating a workshop for an enthusiastic group of teachers. We spent the day creating multimedia collages, creating videos, creating audio recordings, and trying some student response systems. It was great to see so many teachers will to spend a Saturday learning about new things and developing new ideas to use in their classrooms.

Would you like to have me speak at your school or conference? Click here to learn about my keynote and workshop offerings.

Starting on November 24th I'll be offering another section of my Practical Ed Tech webinar series Getting Ready for GAFE. This webinar series has a graduate credit option, click here to learn more about it. 6 seats are left.

Over the last month I've published reviews of various Thanksgiving lesson resources. As Thanksgiving is now less than one week away, it's time to put all of those resources into one list. Here they are...

When Is Thanksgiving? Colonizing America is an episode in John Green's Crash Course on US History. The video starts with the history of Jamestown before moving onto Plymouth. Green does a good job of illustrating the differences between why and how each colony was established. This is video is suitable for high school students, but Green's use of sarcasm (which I actually like) and the details would probably be lost on middle school students.


The History Channel's History of Thanksgiving provides a short overview of the history of American Thanksgiving. This video is suitable for middle school students.

And just for fun here's a video that explains the differences between American and Canadian Thanksgiving. This video is appropriate for high school students. (I would stop it before the credits roll at the end).

The First Thanksgiving: Daily Life is another online activity produced by Scholastic. Daily Life is comparison of the lifestyles of the Pilgrims and the Wampanoag. Students can click through each aspect of daily life to see a comparison of housing, clothing, food, chores, school, and games.

ReadWorks is a non-profit service that offers hundreds of lesson plans and more than two thousand reading non-fiction and fiction passages aligned to Common Core standards. For the (American) Thanksgiving season ReadWorks is offering a set of non-fiction articles about Thanksgiving. The set includes articles appropriate for all K-12 students. Each article is accompanied by ten reading comprehension questions. Those questions are a mix of multiple choice and open-ended questions.
at 9:30 AM
Share
‹
›
Home
View web version