Jeopardy Rocks is a platform for building Jeopardy-style review games. I reviewed the service around this time last year. Just in time for the new school year Jeopardy Rocks released a couple of new features. You can now create an account on Jeopardy Rocks to save your games for later editing and re-use. You can also now save multiple games in your account. The previous version of Jeopardy Rocks did not have an account option. 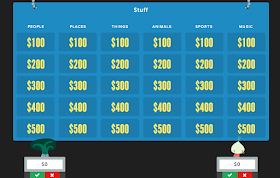 Applications for Education
Like nearly all Jeopardy-style review games, Jeopardy Rocks is a simple tool that you can use to quickly create a review game to use with your students.

A couple of similar tools that you might want to explore are eQuizShow and FlipQuiz. Both of those tools offer galleries of public review games that you can use in your classroom.
at 11:29 PM
Share
‹
›
Home
View web version