Two Chrome Extensions That Can Help You Stay on Task

At one point or another we've all said, "I'm just going to check Facebook/ Twitter/ Pinterest for a minute then I'll get back to work." It's funny how that minute can quickly become ten or twenty minutes. Here are a couple of Chrome extensions that I use when I find myself falling into social media vortex and not being as productive as I should be. These extensions are equally useful to students as they are to adults.

Stay Focusd is a Chrome extension designed to help you stop wasting time on sites like Facebook and get your work done instead. With Stay Focusd installed you can set a time limit for yourself for how much cumulative time in a day that you spend on sites like Facebook, Pinterest, and Twitter. Once you've used up your self-allotted time on those sites you won't be able to revisit them in that browser for 24 hours.

Advice for New Bloggers - Numbers Aren't Always What They Seem 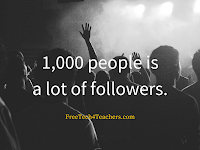 Like a lot of the conferences that I attend, at the ISTE conference I had conversations with a bunch of people who were seeking advice about blogging. At some point almost of those people would say something like, "my blog is small, I only have a few hundred followers." Or they would say, "I'm on Twitter, but I only have one thousand followers." My response to both statements is, "that's awesome!" After that statement I follow up with some context to explain why 1,000 people is a lot of followers.

New bloggers and podcasters often get obsessed with how many followers they have. When you have a few hundred or one thousand followers that can seem like a small amount when you compare it to the more established blogs in a niche. But don't compare your follower/ subscriber count to that of more established bloggers. Instead compare your current subscriber/ follower count against the previous month's. Look to grow month by month not to become the world's most popular blogger in one month.

Let's put 1,000 followers into context. I live in a town of roughly 1,000 people. If I sent a letter to every person in town, I might get positive responses from 20 people. But if I send an email, publish a blog post, or produce a podcast episode for 1,000 people who have in someway said, "yes, I want to get more information from Richard" then I am going to get a far higher rate of response and engagement. Put another way, picture getting all of your followers together in one place and then you'll realize that 1,000 followers is a lot of people.

338,000 people like my Facebook page, but I get more responses from the 6,000 people who subscribe to the PracticalEdTech.com weekly newsletter. Creating a successful blog or podcast isn't about having the most followers, it's about having engaged followers.
at 5:12 PM
Share

On Saturday morning I published a short post explaining the terms Google Apps for Education, Google Drive, and Google Documents. In that post I mentioned that Google Documents can be used offline if you use the Chrome web browser and enable the offline setting for Google Drive (click here for video directions). This morning I awoke to a few emails from folks seeking clarification on the requirement to use the Chrome web browser.

You can use Google Drive and Google Documents in any recently modern web browser including Firefox, Internet Explorer, Safari, and Chrome. You can find out if you are using the most up to date version of a web browser by going to WhatBrowser.org. Simply visit WhatBrowser.org and you will be shown which web browser you're using and if it is the most updated version of that browser. Chrome is the web browser produced by Google. Learn more about web browsers in the video embedded below.


Cookies are small pieces of information that reside in your browser as a result of visiting a website and the activities that you do on that website. They can be helpful in loading a website more quickly in your browser and remembering information for you. They're also used in tracking browsing habits and placing targeted advertising on the websites you visit. In the video embedded below Common Craft provides a good explanation of cookies.