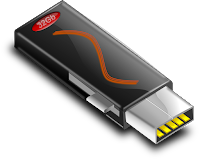 A couple of weeks ago I went to a national office supply store to print sixty documents in color in high resolution. I only need to do this about once a year so it's cheaper to pay the office supply store to do it than it is to own and maintain a color printer. In years past I've brought in a USB drive and printed directly from it. This time I decided that I'd just use my Google Drive credentials to print from the store's networked printer.

I logged into the store's network printer using my Google Drive credentials and attempted to open the file that I needed to print. I wasn't logged in for more than ten seconds before I got kicked out and had to sign-in again. That should have been my first clue that something was wrong. I logged-in again and this time I didn't get kicked off, but I couldn't preview my file. At this point I was frustrated and logged-out of my Google Drive completely and left the store to go home and get a USB drive. Not more than five minutes after I left the store my phone blew-up with alerts from Google asking me to confirm or deny log-in activities. It appears that my Google Account was compromised by using that store's networked printer as there were multiple log-in attempts on my account from multiple locations around the globe. Fortunately, I caught it and responded to it quickly enough that nothing seems to have been compromised in my account other than my passwords which I reset.

The morale of the story is if you use a public networked printer and something doesn't seem right, it probably isn't. And always pay attention to alerts from Google about suspicious log-in activity.
at 8:00 AM
Share
‹
›
Home
View web version