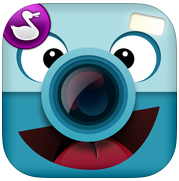 In what looks like a clear move to try to reach the elementary school market, Khan Academy has acquired Duck Duck Moose. Duck Duck Moose is the developer of 21 popular iPad apps including ChatterPix, Draw and Tell, and Moose Math. Duck Duck Moose has also published eight Android apps.

ChatterPix and Draw and Tell are great apps for students to use to create animated videos. One of my favorite student-produced videos of the last year was created by Kindergarten students and their teacher using the ChatterPix app. That video is titled A Healthy Meal.

A Healthy Meal, provides a great example of using ChatterPix to create talking images to use in a video. As you can see in the video below, the students used ChatterPix to create talking vegetables and other foods. Those clips were then put together in a video editor (I can't tell for certain, but I'll guess that they were assembled in iMovie or WeVideo). Watch the video below. It just might be the cutest academic video you'll watch this year.