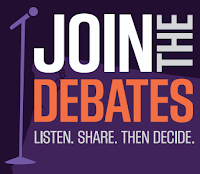 Earlier this year PBS launched a new version of Election Central. That website is dedicated to helping teachers help students understand the process of choosing the next President of the United States. Join the Debates is one of the features of Election Central that teachers should find useful as we head into the last couple of months leading to the election in November.

Other useful resources available through PBS Election Central include videos about Electoral College, lesson plans about the role of media in an election, and lessons about public speaking and persuasion.

PBS Learning Central's interactive election map was previously featured here on Free Technology for Teachers. The interactive election map displays important and interesting facts about each state and each candidate for President. The map will show students where a candidate was most recently seen campaigning. Students can also use the map to find quotes from candidates about hot-button campaign topics like immigration, defense spending, and climate change.

Applications for Education
Facilitating a productive classroom debate can be tricky if you haven't done it often and or you haven't planned it well. Using the resources in the Join the Debates booklet should help you help your students get the most out of a classroom debate activity. While the booklet is designed for debates about topics related to this year's election, the concepts outlined in the booklet could be applied to many other topics.
at 1:56 PM
Share
‹
›
Home
View web version