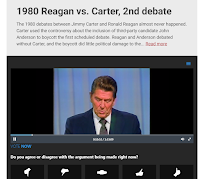 Watch the Debates is a PBS NewsHour website that offers videos of the Presidential debate of 1960 and every debate from 1976 forward. The site also includes videos of some debates between candidates for Vice President including the 1988 debate in which Lloyd Bentson famously quipped to Dan Quayle, "Senator, you're no Jack Kennedy." 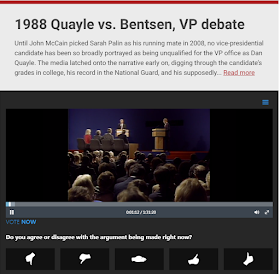 Applications for Education
Watch the Debates could be a great resource for high school and middle school social studies teachers. Through the issue filter on Watch the Debates students can see which issues were most pressing at various points in the last forty years. Students could also see how responses to those issues have changed over the years. Finally, students can see that there was a time when a debate between politicians was about the issues important to the people and didn't devolve into name-calling.

One way that you could use Watch the Debates in your classroom is to have students pick an issue then work in groups to trace when that issue first appeared in a debate and how candidates' responses to that issue vary over time. For example, I might have my students choose the issue of economy then break-up the class into small groups with each group watching and taking notes on a different debate. Then I'd bring the class back together to compare notes on what candidates have said about the economy through the years.

On a related note, check out The Living Room Candidate to see the evolution of Presidential campaign commercials since 1960.

H/T to Open Culture for the Watch the Debates link.
at 10:45 AM
Share
‹
›
Home
View web version