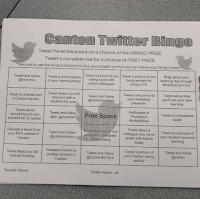 I spent yesterday working with teachers in Canton, Connecticut. A Twitter Bingo board was one of the first things that I noticed when I walked into the room in which I gave my opening talk. I immediately snapped a picture of it and Tweeted it. Throughout the day that picture was liked and reTweeted dozens of times.


This is a neat way to introduce Twitter to teachers #cantonedchat pic.twitter.com/LmigfZ00Ow
— Richard Byrne (@rmbyrne) November 8, 2016


The Twitter bingo chart that I photographed was developed in part by Ruth Kidwell. Ruth later replied to a Tweet from a teacher who wanted to use the chart for introducing Twitter to his colleagues. Ruth's reply included a link to the Google Drawing in which the Twitter Bingo game was created.


It is one thing to talk to your colleagues about using Twitter for professional development, but it's another to get them to actually use it. Twitter Bingo provides people with a fun way to learn about how Twitter works.
at 11:53 AM
Share
‹
›
Home
View web version