Canva Can Help You Increase Your School's Social Media Reach 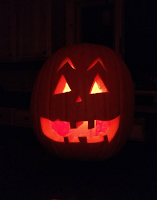 Good evening from Maine where I spent most of the rainy day reading to my daughter and playing with my dogs. It was a great way to spend a day. Looking at my Facebook feed today I saw lots of parents preparing their kids for Halloween activities. We went to a little town celebration of Halloween yesterday afternoon. Whatever you did on this Saturday, I hope you had an enjoyable day.

Here are this week's most popular posts:
1. Great Google Drive Add-ons for Teachers - An Updated Handout
2. How JoeZoo Express Can Save You Tons of Time Grading in Google Documents
3. 7 Halloween Lesson Activities for Elementary School Students
4. Three Good Tools for Collaboratively Creating Multimedia Books
5. My Three Favorite Video Creation iPad Apps for Elementary School
6. How to Add Sticky Notes To Webpages
7. OpenEd Helps You Find Resources to Share In Your LMS


Need a keynote for your conference?
Click here to learn about my keynotes and workshops.

#TeacherDebate - A Live Lesson About the 2016 U.S. Presidential Election

Next week on Tuesday night Keith Hughes, Tom Richey, and Nicholas Ferroni will be conducting a mock Presidential debate on Google Hangouts. Keith will represent Clinton's positions. Tom will represent the positions of Trump. And Nicholas will be the moderator. The event will be streamed and recorded on Keith's Hip Hughes History channel. Learn more about this event by watching Keith's preview video below.


You might be wondering why they aren't having someone play the role of Gary Johnson. Keith answered that question a bunch of times on his YouTube channel. Here's the answer he's been giving:

"We were challenged to do it and we put together quite quickly. It's also much harder to handle five people in a Google Hangout in order to have any type of rational discussion. I know it's not the best answer but it's the only one I have﻿."
at 2:18 PM
Share
‹
›
Home
View web version