One of my most memorable elementary school science lessons included all of us creating working circuits with multiple switches to illuminate light bulbs. Our power source was 120 volt standard outlet. I don't think that would be allowed in most classrooms today, but our teacher, Mrs. Carlson, was young and fearless. I was reminded of that lesson this morning when I watched SciShow Kids' new video about the power of circuits. The video provides students with clear visuals and explanations of how a circuit works including the function of a switch. The video then demonstrates creating a circuit with a battery, small switch, and a light bulb.


An interesting TED-Ed lesson on The Science of Static Electricity.

Brain Stuff has a video that offers a good explanation of why we hear a buzzing sound coming from fluorescent lights found in many schools and office buildings. The video is embedded below.

Minute Physics offers a short video explaining how modern light bulbs work and how light bulb design has changed over the last 100+ years.The video also includes explanations of the different types of modern light bulbs and their applications. The video is embedded below.

The Blobz Guide to Electric Circuits is a neat series of interactive animations designed to help students of elementary and middle school age learn how electric circuits work. There are five sections to the series. Each sections builds upon the lessons of the previous section. The series starts with the basics of what makes a circuit complete and concludes with diagramming and building circuits. Each section in the series has a few short lessons and is followed by an animated interactive activity to which students can apply what they have just learned.
at 11:17 AM
Share

The History of Macy's Thanksgiving Parade

For millions of Americans watching Macy's Thanksgiving Day Parade on Thanksgiving morning is as much a tradition as watching football after the turkey dinner. The Macy's Parade is 90 years old this year. It has evolved quite a bit since its early days. Macy's Parade History offers an interactive timeline of the parade's history. You can select any decade on the timeline to view 360 interactive images of the parade. Each decade on the timeline also includes some video clips. Scroll through the decades and you'll see that the parade reflects the popular culture of each decade.


The Next News Network also offers a nice, concise summary of the history of the Macy's Thanksgiving Day Parade. 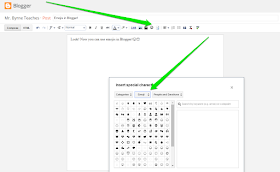 You can search for special characters by name, by drawing a symbol, or you can just browse through the galleries.
at 6:30 AM
Share
‹
›
Home
View web version