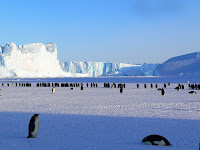 Virtual reality is giving many of us the opportunity to see places that we may never visit in a level of detail that could never be experienced through print or even 2D video. For example, thanks to The New York Times VR app (available for iOS and Android) we can now experience parts of Antarctica in virtual reality. As a part of their Antarctica series The New York Times has published four short films (9-15 minutes) that can be viewed in virtual reality.

The virtual reality films in series not only take viewers out on the ice and frozen ground of Antarctica, they also take you below the surface of the ice and through valleys between mountains in Antarctica.

It should be noted that these films can be viewed without virtual reality headsets. If you view them that way, they won't have the immersive 360 degree views that can be experienced with the VR app and viewer.

Additional Resources for Learning About Antarctica
Since 2012 Google has offered Street View imagery of parts of Antarctica.

The Antarctic Food Web Game is an online game produced by WGBH to support middle school lessons on food chains and Antarctica. The simple game presents students with charts and tables about animals and plants found around Antarctica. Students have to take the information presented to them to create a correct food web. The key to creating a correct food web is understanding where various animals fit in the food chain.

Who owns Antarctica? That's an interesting question that many of my geography students wondered and asked over the years. The answer to that question is a clear and simple one. As more people, countries, and companies explore the continent it will become more and more important to define what can or cannot be done in Antarctica. CGP Grey tackles these issues in his video Who Owns Antarctica?

H/T to The Adventure Blog for the NYT videos.
at 9:26 PM
Share
‹
›
Home
View web version