10 Ways to Use Google Earth in Your Classroom

A couple of weeks ago Google released the new web-based version of Google Earth (take a tour of it here). The older desktop version of Google Earth is still available for free as well. The advantage of the web-based version is that anyone with a Chromebook or laptop can use it. The disadvantage to it is that it doesn't have as many features as the desktop version. Both versions have a place in the classroom. Here are ten ways you might have your students use Google Earth in your classroom.

1. Take a tour of new and interesting places.
This is the most basic activity that you can do either version of Google Earth. The new version has many pre-made tours called "Voyages" that your students can view. Stops on the voyages include notes about the notable landmarks in the tour. The desktop version of Google Earth also has some pre-made tours. You can also find tours made by others and use them in Google Earth. Watch this video to learn how to do that.

4. View comparisons.
Use this method for creating placemarks in the new Google Earth and you can show multiple data sets in one map.

5. Layer images over maps.
The desktop version of Google Earth lets you layer images over a view of the world. Adjust your zoom level to cover more or less of the map with your image. Adjust the image's opacity to let the map faintly show through the image. This is a great way to show students a comparison of a historical map with a contemporary map. Try using this method to show how coastlines and waterways have changed over time.

7. Explore the moon.
The desktop version of Google Earth includes a moon view. Select the moon view and view some of the placemarks in the NASA layer.

8. Explore Mars.
You can explore Mars and through the use of the NASA layer in the desktop version of Google Earth.

9. Watch a timelapse of imagery.
The desktop version of Google Earth has a timeline slider that you can use to see historical imagery of some cities.

We'll be taking an in-depth look at a few of these features in Teaching History With Technology.
at 11:30 PM
Share

7 Ways to Use Google Keep in Your Classroom

This week's Practical Ed Tech Tip of the Week featured a demonstration of how to use Google Keep to annotate images. That is just one of many ways that you and your students can use Google Keep. G Suite for Education users, remember that Google Keep is now a core product in G Suite.


2. Add Google Keep notes and bookmarks to your Google Documents.


3. Use Feedly with Google Keep on your Android device.


4. Use Google Keep and Feedly in your web browser to keep track of news stories.


6. Use Google Keep to help you work toward your goals.


7. Annotate images in Google Keep on Chromebooks and on Android devices.

Last week's viral Google Docs phishing scam provided a good reminder to many that we should always give a critical eye to emails and social media posts that don't look quite right. It also served as a reminder that we need to educate students and, sometimes, our colleagues about phishing attempts. Common Craft has an excellent video on the topic. You can watch the video as embedded below or on the Common Craft website.


On a related note, if you get a Facebook friend request from someone you're already friends with, it's likely a scam. Your best bet is to delete the request. But for some folks it's an opportunity to have fun with a scammer as one of my friends recently did when she suspected a scam. See the screenshot below for an explanation. 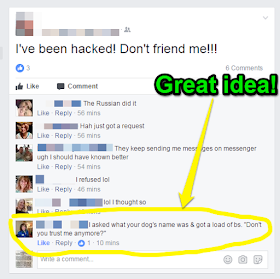 Disclosure: Common Craft videos require a subscription to be used in classrooms. I have an in-kind business relationship with Common Craft.
at 11:00 PM
Share
‹
›
Home
View web version