Last fall ClassDojo introduced a new digital portfolio tool that they call Student Stories. Initially, it was only available on iPads then it expanded to users of all types of computers and tablets. Student Stories puts students in charge of assembling their portfolios. Their portfolios can include digital work as well as physical work that they take pictures of with a camera on a mobile device or on a laptop. Recently, ClassDojo added four new features to Student Stories that increase the number of ways in which students can showcase their work.

7 Travel Tips for Teachers Flying to ISTE (or other conferences) 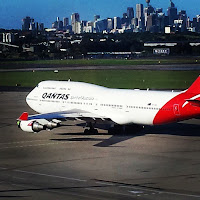 The annual ISTE conference is just a few weeks away. So this is probably a good time for me to share some of my best travel tips for teachers who don't fly often, but are flying to ISTE or other conferences this summer. These are tips based on flying more than 100,000 miles every year for the last five years.

1. Check-in online as soon as possible. Most airlines let you check-in for a flight 24 hours in advance. If you don't have a pre-assigned seat and you want a chance at getting the best seat possible for your fare class (there are different fare classes beyond just coach or first), check-in early. Be aware that some airlines charge a fee if you don't check-in online.

2. Get there early! This is obvious, but it cannot be stressed enough.  Other than the holidays, summer is the busiest leisure travel time which means there are lots of people in the security lines who are unfamiliar with the process. Unless you have TSA Pre-Check or elite status on an airline, be prepared for long security lines.

3. Plan for delays and cancellations. Even if it is bright and sunny at your home and at your destination, there can be delays to your flights. Before you get to the airport look at alternate flights to your destination that are available on your airline. You can do this by doing a dummy booking on the airline's website (stop before the field asking for your credit card). Write down those flight numbers and keep them handy in case of significant delay or cancellation. This will save the airline agent time and relieve a bit of your stress if you know what your options are.


Remember this when delays and cancellations occur; the airlines don't like delays any more than you do. The gate agents, flight attendants, and phone agents are probably more stressed out by the delay than you are. Getting huffy with them and saying things like "I'll never fly this airline again" won't help you or anyone else. (Insider info: Most flight attendants don't get paid for time on the ground when the aircraft door is open).


4. Know your airline's reservations desk phone number. When your flight gets delayed or cancelled you will have to wait in line to see an airline agent. Get on the phone with the airline's reservation desk while you're waiting in line. Often you will get through on the phone before you get to the front of an airport line. Give the phone agent the alternate flight numbers that you found before you left your house.

7. For the nervous flyers: I was once a very nervous flyer too. That changed once I realized that the pilots want to land safely just as much as I do. Pilots won't fly unless they feel safe. Those sounds you hear the plane making, they're normal.

Bonus tip: free hotel perks!
Even if you only plan to stay at a hotel once a year, join its loyalty/ rewards program. Almost all of the major hotel chains give free in-room wi-fi to all guests who are enrolled in their loyalty programs. I've also received free bottled water, soda pop, ironing services, and snacks just for being a member of Kimpton and Omni's loyalty program.

Myth busted: those airline lounges that you see in U.S. airports aren't anything special. There's nothing more to them than free coffee, cheap wine/beer, and generic snacks in a slightly less crowded setting that the main airport terminal. It's not something I'd pay for directly (I get access as perk of one of my credit cards).
at 8:00 AM
Share

I offer six on-demand professional development webinars through Practical Ed Tech. You can download them and watch them when it is convenient for you. Some people watch in chunks while others will watch all at once. Either way, the choice is yours.

For the next five days all of my on-demand professional development webinars are available in one bundle for just $25. That’s six hours of PD that you can get at your leisure. This offer is valid until midnight on June 11th (Eastern Time).

The webinars included in this package are:


This discounted bundle of professional development webinars is available until midnight (EDT) on June 11th. Click here to purchase today.
at 7:30 AM
Share

Interpreting data from a spreadsheet can feel a bit overwhelming to a lot of students. That's why I'm excited about Google's latest update to Google Sheets.

Last week Google added a new feature to make data visualization and interpretation easier than ever. Now when you open the Explore feature in Google Sheets you can simply type in a request for a chart to be displayed based on the data in the sheet. You can also make a simple request for something like the mean or median value of a column.

Applications for Education
I often point out in my search strategies webinars that just because spreadsheet data can be hard to interpret that doesn't mean that students should avoid it. Spreadsheet data can give students some valuable insights if they can get to the bottom of it. These new Google Sheets options can help students get a better understanding of the data contained in spreadsheets.
at 7:00 AM
Share
‹
›
Home
View web version