In June I hosted four online courses for teachers and school administrators. In July I am offering four more online learning opportunities. A description of each course, its dates and times, and registration links are included below. If you’re a subscriber to the Practical Ed Tech newsletter be sure to use the discount code “subscriber” when you register.

Practical Ed Tech Jumpstart
The landscape of educational technology is constantly changing and it’s easy to feel like you don’t know where to start. The Practical Ed Tech Jumpstart was designed for you. This three week online course will walk you through a simple yet powerful framework for using technology in your classroom. You’ll come away from this course with a playbook of activities that you can adapt to use in almost any classroom setting from elementary school through high school. This three week course begins on July 11th at 7pm EDT. Learn more and register here.

Teaching History With Technology
In Teaching History With Technology you will learn how to develop engaging and challenging learning activities through the use of tools like Google Earth and Maps, video production tools, primary source databases, and how to help your students become better researchers. This course features three interactive online meetings along with a discussion forum in which you can further interact with me and your classmates. The cost of the course is $97 including access to the live sessions, recordings of the webinars, handouts, and PD certificate. The next course begins on July 10th at 7pm EDT. Register here.

From Blog to Job – A Teacherpreneur Jumpstart
I’ve been earning money through my blog for eight years. I’ll teach you how to do it too! In this four week course I’ll give you the blueprints for developing an online presence through which you can earn money. All the questions that you’ve always wanted to ask about making money through blogs and social media will be answered for you in this course. Learn more and register here. The next course begins on July 2nd at 7pm EDT.
at 7:15 AM
Share 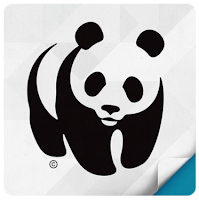 WWF Together is a beautiful iPad app and Android app that features interactive stories about endangered animals around the world. Each of the interactive stories includes beautiful images and videos, facts about the animals and their habitats, and the threats to each of the animals. Some of the animals currently featured in the app are pandas, marine turtles, elephants, tigers, polar bears, bison, whales, gorillas, rhinos, and snow leopards.

In Pieces is a neat site that features the stories of 30 endangered animals around the world. Visit the site and you will be greeted by a little animation that comes together to form the shape of a whale. After the animation plays click through to see the stories of the 30 animals featured in the site. Each animal's story is told with text, images, and video. You'll learn about the threats to each animal, its native habit, and efforts to save each animal.

Applications for Education
After learning about the animals in the site and apps I might have students conduct their own research about endangered animals then put together visual reports about those animals. I would consider having students use Pic-Collage and Thinglink to make their own interactive displays about endangered animals. Tutorials for that process can be found here.

Get Inspired By These Videos

This is a guest post from Rushton Hurley. Rushton is the founder of Next Vista for Learning and the author of Making Your School Something Special.

I love an inspiring video.

While I think it's inspiring that there are over two thousand short videos created by and for teachers and students everywhere on NextVista.org, we also have a resource page filled with videos on other sites.

These stories tell of inspiring young people, or an amazing teacher, or simply a moment that captures your heart. 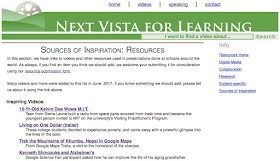 We believe these sources of inspiration might be used to rally your team, or perhaps prompt important discussions with your colleagues.

Next Vista for Learning: Sources of Inspiration
http://nextvista.org/resources/inspiration/

Feel free to share what you find with others. All of us occasionally need a reminder that there are all kinds of wonderful moments happening all around.
at 6:46 AM
Share
‹
›
Home
View web version