A Comparison of Historic Journeys

I'm writing this as I zoom through the air at 500+ miles per hour to get home after ISTE 17. Just 100 years ago this trip would have been on a train for days. And 100 years before that the journey would have be counted in weeks and months. That kind of comparison is what you will find on A Race of Discovery.

Discover more ideas for teaching history with technology in my upcoming course, Teaching History With Technology.

Kahoot announced the release of new mobile app this week at ISTE 17. The app, still in beta, addresses a lot of the complaints about Kahoot that I've heard from teachers over the last few years.

The first item to note in the mobile app is that your students will now see the questions and answer choices on the same screen. Previously, your students always had to look at a screen in the front of the room for the question and then look back down at their devices for the answer choices. That disconnect sometimes causes students to select the wrong answer choice despite actually knowing the correct answer.

Putting the questions and answer choices on the same screen enables Kahoot to now offer a "play at home" option. "Challenges" is the term that Kahoot uses to describe the option for students to play games from home or anywhere else that they connect to the web. You can send challenges to your students to play anywhere and anytime.

Learn more about the new Kahoot mobile app in the video embedded below.


To try the new Kahoot mobile app, complete the form on this Kahoot page.
at 8:00 AM
Share

The ISTE Presentation Almost Everyone Missed - And Shouldn't Have 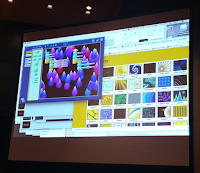 The ISTE 17 presentation that I was looking forward to more than any other was Dr. Gary Stager's 50th Anniversary of Logo. I got there early because I genuinely thought the ballroom would be packed. Instead, there were maybe three dozen of us in the room. That's a shame because ISTE attendees missed out on a fantastic tour through the history, development, and role of Logo and programming in general in schools.

For those that don't know, Logo is the basis of some of the most popular programming tools in school today. Scratch, Snap, MIT App Inventor, and many other tools are all rooted in Logo.

Logo Writer was my introduction to computers when I was an elementary school student. As I've said in many presentations over the years, getting to use Logo Writer was the first time that I wanted to stay after school and come in early for academic reasons. I spent a lot of hours in sixth grade programming various animations. Here's a screencast of someone using Logo Writer. (Public domain video from Archive.org).

Turtle Art is software that you can get today for free to do many of the same things that I was doing in Logo Writer. A helpful tip about Turtle Art that I learned from Gary was that you can drag a completed Turtle Art project from the gallery of examples into the software on your desktop and have the program revealed. The challenge to then give to your students is to change the program to create a new design. Gary gave the example of turning stalactites into stalagmites. Go to Turtle Art, get the software and try it for yourself. It's a fun challenge.

Visit Gary Stager's 50th Anniversary Logo Resources page to learn more about Logo, Turtle Art, and the development of programming in schools.
at 7:30 AM
Share

Ten Ways to Use Google Earth In Your Classroom - Handout

In the PDF embedded below I provide ideas and links to directions for ten things your students can do with Google Earth. (Click here if you cannot see the embedded PDF).


Join me in July for Teaching History With Technology to learn how to use Google Earth and many other tools in your social studies lessons.
at 7:00 AM
Share
‹
›
Home
View web version