Create Your Own Google Expeditions 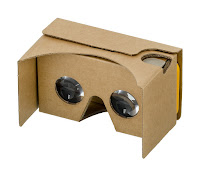 Other ways to create your own virtual reality imagery and tours:
In the Practical Ed Tech Tip of the Week I featured a free program called Patches that enables anyone to build virtual reality tours. Patches provides tons of animations, objects, and scenes that you can customize. The program also supports importing your own images and animations.

You can get the Cardboard Camera app for Android here and the iPhone version here.
at 9:26 AM
Share
‹
›
Home
View web version