The Web Version of Google Earth Finally Gets a Measuring Tool 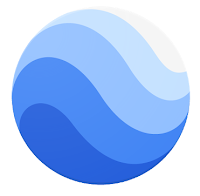 Google's announcement about the new measuring tool states that it is available now in Chrome (browser) and Android versions of Google Earth. However, as of 11:20 Eastern Time I don't see it in any of my accounts. Once I get a chance to use it, I'll publish a video tutorial on how to use it.

Applications for Education
The measuring tool in the desktop version of Google Earth has always been useful in developing lessons that incorporate math and geography concepts. Tom Barrett's Maths Maps has always been a great source of inspiration on that topic. Now that a measuring tool will be available in the browser version of Google Earth teachers whose students use Chromebooks can avail themselves of some of the ideas that Tom has shared in Maths Maps.
at 11:25 AM
Share
‹
›
Home
View web version