Best of 2018 - NASA's Interactive Guide to the Solar System

I have been reviewing and sharing sharing resources from NASA for almost as long as this blog has existed. Somehow, I missed NASA's Solar System Exploration until it was mentioned last week on Maps Mania. 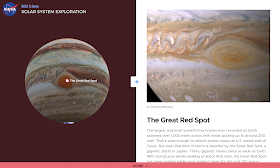 Applications for Education
Google Earth (the desktop version) has files for displaying the moon and Mars. But to explore the rest of the solar system, NASA Solar System Exploration is a must-bookmark. It could make a great reference site for middle school science classes.
at 5:48 AM
Share
‹
›
Home
View web version