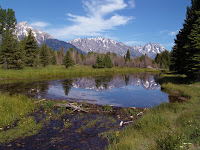 As I write this What is Federal Land? is the #49 trending video on YouTube. It's nice to see an educational video trending that high on YouTube. The video was produced by CGP Grey who has produced some other fantastic educational videos over the years. Through What is Federal Land? viewers can learn how land in the United States became federal land, the agencies that manage that land, and why citizens of western states and citizens of eastern states may have different views about federal lands.


Applications for Education
It just so happens that the video addresses a topic that I used to teach in my civics course. That topic was the question of federal jurisdiction vs. state jurisdiction. I used to use a Peter Jennings documentary about the re-introduction of wolves in Idaho. In that documentary Jennings explained why ranchers in Idaho opposed the re-introduction of wolves but weren't able to prevent it because the wolves were re-introduced on federal lands within the state. What is Federal Land? like that old Peter Jennings documentary could be a great way to spark a classroom discussion about federal rights versus states' rights.
at 5:00 AM
Share
‹
›
Home
View web version