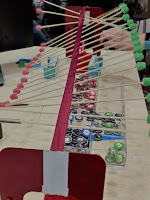 "Hacking STEM" was one of the initiatives that Microsoft was heavily promoting at the BETT Show last month. I asked a few Microsoft employees what "hacking STEM" meant. They all replied with explanations that centered on the idea of providing teachers with hands-on STEM lessons and projects that can be done without having to spend much money, if any, on physical materials. One of the many examples that Microsoft had on display to represent their hacking STEM projects was the homemade wave machine pictured in this blog post. You can find directions for that project here (link opens PDF).

Microsoft's Hacking STEM Library is divided into activities that take multiple days to complete and activities that can be completed in one day. All of the activities in the Hacking STEM Library include detailed directions, materials lists including places to acquire materials, and lesson objectives. The homemade wave machine project is an example of a one-day project. This lesson on harnessing electricity to communicate is an example of a multiple day project.

Make Beliefs Comix has long been one of my favorite tools for creating comics. In fact, I recently featured it in this post about using comics in social studies lessons. Over the weekend the founder of Make Beliefs Comix sent me a note about the redesign of his free comic creation tool.

The new version of Make Beliefs Comix offers a streamlined homepage. Streamlining the homepage made it easier to find the comic creation tools and other resources that the site offers. The new version has been optimized to run efficiently on iOS and Android phones and tablets. Another new feature of Make Beliefs Comix is a capacity for creating comics containing up to nine frames.

The thing that Make Beliefs Comix has been known for is its support for multiple languages. Previously, that feature was limited to six languages. That feature has been expanded to support any language that you can type on your keyboard.

Applications for Education
Make Beliefs Comix doesn't require students to register on the site in order to create, share, and print their comics. In addition to excellent comic creation tools, Make Beliefs Comix provides dozens of free ebooks that contain writing prompts and story starters that you can access for free.
at 8:57 AM
Share
‹
›
Home
View web version