Earth Day is coming up in a few weeks. Here are a few resources that you might consider incorporating into your Earth Day lesson plans. I'll be sharing more resources later this week.

Google offers tours in its Explore Climate Change series. The tours explore the actions of organizations to prevent or adapt to climate change in different parts of the world. These tours include the World Wildlife Foundation's efforts in the peatland swamps of Borneo, Greenpeace's actions to prevent deforestation of the Amazon, and Conservation International's efforts to reduce deforestation in Madagascar. The tours can be viewed three ways, in Google Earth, in the Google Browser plug-in, or through YouTube.

My Garbology, produced by Nature Bridge, is an interactive game that teaches students about sorting garbage for recycling, reusing, and composting. Students sort garbage into four bins according to where they think each piece of garbage should go. When a piece of garbage is sorted correctly a series of short animations explains why it should be there.  For example, a banana peel should be sorted into the compost bin. When the banana peel is placed into the compost bin students watch and hear a series of animations explaining how composting works.

Disclosure: Storyboard That is an advertiser on this blog.
at 8:04 PM
Share 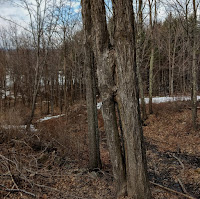 March has come and gone. Today was a nice Sunday to play outside with my older daughter. In walking the back edge of our property we found the interesting cluster of trees seen in the picture. I hope that you had a nice Sunday and nice start to your month too.

Every month I put together a list of the most popular posts of the previous 30 days. Doing this is a good way for me to recognize what all of you are interested in. It also gives you a chance to see if there is anything neat that you missed in the previous month.


Book Me for Your Conference
I’ve given keynotes at conferences from Australia to Alaska for groups of all sizes from 50 to 2,000+. My keynotes focus on providing teachers and school administrators with practical ways to use technology to create better learning experiences for all students. I like to shine the light on others and so I often share examples of great work done by others as well as my own. Click here to book me today.


Online Professional Development
On PracticalEdTech.com I offer on-demand professional development webinars and courses. There are significant discounts for groups who enroll in G Suite for Teachers or Teaching History With Technology.