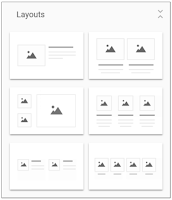 This isn't a major update to Google Sites but it is nice to have more options for layout design. These new layout options will be rolling out to users over the next couple of weeks.

How to Create a Backchannel Chat