Find Free Photos by Searching on Every Stock Photo

Regular readers of this blog probably know that my go-to places for free images are Photos for Class, Pixabay, and Unsplash. But those aren't the only places that you can find free images to use multimedia projects. Rather than lucky-dipping through other sites you can just head to Every Stock Photo for find a picture. Every Stock Photo is a search engine for public domain and Creative Commons licensed pictures. When you search on Every Stock Photo it pulls images from dozens of sources across the web. If you click on an image in your search results you will be taken to a larger version of the image, a link to the source, and the attribution requirements for using that picture.

The Vox video about why we say "OK" raises the question of whether you should write "OK," "okay," or "O.K." That's just one of many tricky aspects of spelling in English. The TED-Ed video Making Sense of Spelling explains why some words are spelled the way they are and why some words have multiple spellings. The video is embedded below.

A few days ago Vox published a short video that explains the origins of "OK" and how it came to be something that we say, read, and click everyday. By watching the video you can learn where OK originated and the roles of a presidential campaign, the telegraph, and railroads in spreading the use of "OK" until it became commonplace to say it. The video also teaches viewers why some businesses use "K" to replace "C" in product names.


Vox's video about "OK" reminded me Words of the World. Words of the World is a collection of videos featuring historians and linguists explaining the origins of and history of the use of words in the English language. The videos attempt to put the words into a somewhat modern context. For example this video about the word "guerrilla" makes reference to Che Guevara. The video I've embedded below explains the word "coup."

Applications for Education
Words of the World could be an instructive model for your own lesson combining history and language arts. Have your students pick a word or two that they think is common and research it. Then have them create their own short videos in which they explain the history of those words. You might even have them research the dialect of the areas in which they live. For example, where I live we have a Range Pond. Most people would pronounce that as range, like "home on the range" yet everyone around here pronounces it as rang as in "the bell rang."  I'm not sure why that is the case, but I would love to find out. 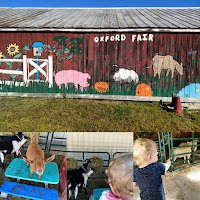 Good afternoon from Maine where it is a beautiful late summer day. We just got back from a great morning at the Oxford County Fair where my girls enjoyed seeing pigs, goats, sheep, cows, horses, and even an emu! While my daughters nap I am working on some new blog posts.

This week nearly 500 people joined the webinar that I hosted about making handouts through Storyboard That templates. If you missed the webinar, you can view the recording right here on my YouTube channel. Next week I'm hosting a Practical Ed Tech webinar about the new features of Google Classroom and how you can use them in your classroom this year. Click here for more information about that webinar.

Here are this week's most popular posts:
1. Share Math Playground Activities to Google Classroom
2. A Parent's Guide to Instagram - Including a Glossary and Discussion Questions
3. Two New Google Classroom Features That Everyone Has Been Asking For!
4. A Good Site for Vocabulary Lists and Practice Activities
5. The Online Atlas of the Historical Geography of the United States
6. Two Interactive Copies of the Constitution for Constitution Day
7. Video Resources for Constitution Day


Book Me for Your Conference
I’ve given keynotes at conferences from Australia to Alaska for groups of all sizes from 50 to 2,000+. My keynotes focus on providing teachers and school administrators with practical ways to use technology to create better learning experiences for all students. I like to shine the light on others and so I often share examples of great work done by others as well as my own. Send an email to richardbyrne (at) freetech4teachers.com book me today.

Practical Ed Tech is the brand through which I offer PD webinars.
TypingClub offers more than 600 typing lessons for kids.
Storyboard That is my go-to tool for creating storyboards.
Book Creator is a great tool for creating multimedia books.
Kami is a great tool for annotating and collaborating on PDFs.
University of Maryland Baltimore County offers a great program on instructional design.

Seterra offers a huge selection of geography games for students.