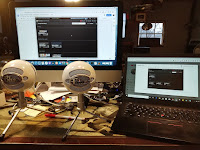 Screencast-o-matic is available in a free version and in a paid version. The free version is more than adequate for most classroom settings as long as you're willing to accept a Screencast-o-matic watermark on your videos. The paid version ($18/year) grants you access to Screencast-o-matic's desktop tool which is what I use. The desktop version lets you record and edit on your desktop instead of in your web browser. The desktop version also lets you edit videos that you recorded with other tools. And the desktop version has many other features including green screen editing, video annotation, and lighting adjustments. But you really don't need those features for the type of tutorial videos that I make. Therefore, give the free version a try if you need a quick and easy way to create a tutorial video.

I've been using Blue Snowball microphones since two of my early podcast hero, Jeff and Dan at Wicked Decent Learning, recommended them. Blue Snowball microphones represent an inexpensive way to drastically improve the quality of audio that you record. As mentioned above, I own two of these microphones. One of which is the one that goes on the road with me and has taken more drops than I care to admit. (Travel tip, take the microphone out of your bag before going through a TSA scanner or you'll spend lots of time with a TSA agent swabbing it down for traces of explosives).


I'm often asked what I use for recording tutorial videos. There are two main components. 1. Blue Snowball microphones. 2. Screencast-o-matic. That's about it. #edtech
A post shared by Richard M. Byrne (@rmbyrne) on Dec 14, 2019 at 12:06pm PST