Lee's Map of Gettysburg - And Tools for Making It Interactive 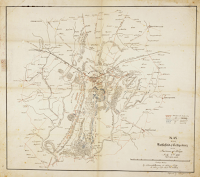 Today's featured document featured by the National Archives is a copy of General Robert E. Lee's map of the Battle of Gettysburg. If you download a copy of the map (which you can do as it is in the public domain) and then zoom-in on it, you will be able to see the notations about troop positions.

As someone who is generally fascinated by maps and history, I immediately started thinking about how this map could be used in a U.S. history lesson. My first thought was to have students enhance the map by making a copy and then uploading it to Thinglink. Once in Thinglink students can add interactive pins to it to explain the significance of places on the map. Those interactive pins could include text, images, and videos. Watch this video to learn how to use Thinglink with a map.

Another way to make this map interactive is to download a copy then upload it to Formative. In Formative you can then add pins to the map. Each of those pins can include questions for your students to answer. A demonstration of how to use Formative for that type of activity is available in this video.

Finally, as a Mainer, I can't think about the Battle of Gettysburg without thinking about this scene from the movie Gettysburg.

Flippity is one of five favorite Google Sheets add-ons for teachers because it provides easy-to-follow templates for creating lots of useful things like progress trackers, spelling games, multimedia flashcards, and Jeopardy-style review games. Flippity's Jeopardy-style game template, called Quiz Show, was recently expanded. The new version lets you have up to eight players or teams at a time. You can see a sample quiz show in action here.


You wanted it, you got it. Flippity Quiz Show now allows up to 8 teams (up from 6). https://t.co/rcueaNxbBH pic.twitter.com/ZhSulkbRKC
— Flippity (@flippitynet) July 3, 2019

Watch my video that is embedded below to learn more about using Flippity's Google Sheets add-on.

How to Quickly Copy Questions Between Google Forms

This week Google added a new "import questions" function to Google Forms. This is a native feature that lets you view your previously created Forms and then select questions to import into a new Form. This feature removes the need to use an add-on like Form Recycler or to do any copying and pasting. Watch my new video that is embedded below to learn how to quickly copy questions between Google Forms by using the new import feature.

Every July the Tour de France winds through the countryside before arriving in Paris. Every year the course takes a different route. One of the things that I always enjoy about watching the race is seeing all of the historic places the riders pass. NBC Sports is usually pretty good about sharing some history of those places during their telecast of the race. But there is only so much history they can share in television soundbites. That's why for the last few years I've encouraged students to create their own virtual tours of the Tour de France.

Creating a virtual tour of the route of this year's Tour de France could be a great way to get students to dig into history and share their findings in a multimedia format. Here are three ways that students can create virtual tours.


Use My Maps to Make a Custom Map of the Tour de France
Students can use Google's My Maps tool to create a map with placemarks for the start and end points of each segment of the race. In addition to the town and city names have them include a handful of interesting facts about each placemark. Students can also include pictures and videos in those placemarks. If you have never tried using Google's My Maps, watch my video below to learn how to get started.