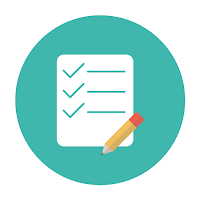 Earlier today Google released a convenient update to the Google Drive iOS and Android apps. The update enables users to fill out PDF forms on their phones and tablets. The update will be rolling out over the next couple of weeks although some users may already see the new feature.

Being able to fill out a PDF form on a phone could be convenient for parents who need to fill out a lunch order form for their children at the beginning of the school week. They can now do that without having to print the form.

It's important to note that Google has stated that the new feature is not for digitally signing documents. If you want to do that, I recommend using a service like HelloSign.

Bad News is a website that offers simulations that show visitors how misinformation is spread through social media. Bad News is available in two versions. The regular version is intended for those who are high school age or older. Bad News Junior is appropriate for middle school and older elementary school students. The difference between the two versions is found in the news topics that are used in the simulations.

In both versions of Bad News players work through a simulation in which they attempt to build a Twitter following by spreading misleading news stories. (I must emphasis that there are no real Tweets sent and you don't have to even have a Twitter account to play Bad News). Through the simulation players learn how headlines, memes, and Tweets are designed to manipulate people and prompt reactions from them. The simulation also shows players how Twitter bots are used.

There are six distinct sections of Bad News. At the end of each section players are awarded a badge signifying that they have learned about the manipulation techniques associated with trolling, impersonation, discrediting, polarizing, emotional manipulation, and conspiracy theories. 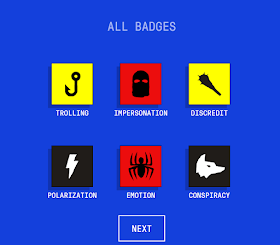 Bad News does offer a short guide, in the form of this PDF, to using Bad News Junior in your classroom.

As I played the game and then researched the developers I couldn't help but think, "am I fall for a fake?" Despite learning about the game from a trusted source, Larry Ferlazzo, I still did my own research to make sure that Bad News wasn't an elaborate ploy to get people to participate in the spread of a game that was bad news. It all seems to be on the up and up.
at 6:07 AM
Share

When the Shine is Gone

Yesterday, Quizizz made an announcement about some new features that they have added to their quiz game service. As I was writing about those features I started thinking about a comment that I am starting to hear on a fairly regular basis about services like Quizizz and Kahoot. That comment is, "our kids are bored with Kahoot/ Quizizz." The last time I heard that comment it was followed by "do you have anything more exciting we can do for review?" I addressed that comment and question in a new video and Practical Ed Tech podcast episode.

The on-demand version of Getting Going With G Suite contains ten self-paced modules. The modules go beyond the nuts and bolts of using G Suite for Education and dive into practical classroom uses for all of the G Suite for Education tools. In the course I share activities that I have done and continue to use with students of all ages.

Enjoy a National Park for Free This Weekend

Portions of this post originally appeared on one of my other blogs, Ed Tech Fitness.

The U.S. National Parks Service is turning 103 years old on August 25th. In recognition of the Parks Service’s birthday admission is free to all parks on the 25th. Find the National Park that is closest to you through this interactive map.

This is the third of five free entrance days that the National Park Service is offering this year. The next one is on September 28th, National Public Lands Day. The last free day of the year will be on November 11th, Veterans Day.

Another way to share a National Parks story is to create some panoramas for others to enjoy in their web browsers or in a virtual reality headset. In the following video I demonstrate how to use Google's Cardboard Camera app to create a panorama.

Learn About the Birth of the National Parks Service
Teddy Roosevelt was instrumental in the creation of the National Parks Service. A few years ago I read a fantastic book titled Wilderness Warrior – Theodore Roosevelt and the Crusade for America. The book tells the story of Roosevelt’s life through the lens of his interest in wilderness and wilderness preservation. It is one of the most fascinating 900+ page books I’ve ever read.
at 4:30 AM
Share
‹
›
Home
View web version