A Great Series for Introducing or Reviewing Arduino Programming Concepts 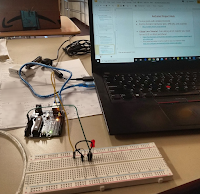 Arduino programming was one of the things that we were really starting to get rolling on just before school closed. Now that my school is closed and we're doing remote teaching and learning, I'm using EDpuzzle to create review activities for my students.

This week I used EDpuzzle to create lessons based on a great series of Arduino programming basics. The videos were produced by Bob at I Like to Make Stuff. In the three part series he covers the big, basic concepts of programming in general before moving into the specifics of Arduino programming. The final video in the series puts everything together for viewers. And if you're wondering what an Arduino is, Bob has that covered too. The first video in the series is embedded below and the rest can be found on I Like to Make Stuff.

If you're wondering what EDpuzzle is and how it works, I have that covered here.


And you're interested in learning more about Arduino, there's a section of the Practical Ed Tech Virtual Summer Camp dedicated to it.
at 8:10 AM
Share
‹
›
Home
View web version