July PD Opportunities With Me 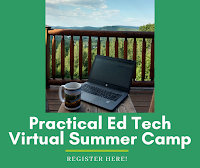 The Practical Ed Tech Virtual Summer Camp consists of ten live webinars spread across five days. There is a webinar at 10am ET and 1pm ET each day of the week. Recordings of the sessions will be available to those who register but cannot attend every live meeting. Topics covered in the webinars includes making virtual tours, creating instructional videos, fun formative assessment, classroom podcasting 101, and building your own apps (that one was a lot of fun last week). The complete list of topics can be seen here. FAQs are answered here.

Teaching History With Technology is the other live, online course that I'm hosting in July. This course will run July 13th-17th. Teaching History With Technology is a series of five live webinars. Each interactive webinar features practical ideas for using technology to create new, engaging lessons or to update some of your existing “go-to” history lessons. Detailed handouts are provided with every webinar. And if you miss a meeting or you just want to see something again, a recording of the webinars will be available to you too. Register here.

People sometimes ask why I advertise these courses here, the short answer is that registrations from these courses help to keep the lights on for Free Technology for Teachers.
at 3:00 PM
Share

TechSmith's Jing was the first tool that I used to make screencast videos more than a decade ago. It was amazing to be able to quickly record a short video to explain things to colleagues and students. Since then other and better tools have come along including tools like Snagit made by TechSmith. Last spring Techsmith announced that they were winding down the Jing project because, in part, it used Flash as the file output. The end of Jing has now arrived and TechSmith is replacing it with a free product called TechSmith Capture.

You can download TechSmith Capture for free to use on Windows and Mac computers. Like its predecessor TechSmith Capture can be used to create screencast videos and capture screen images. An update over Jing is found in the fact that you can now record with your webcam while recording your screencast video. Finished videos are rendered as MP4 files that you can use in all of the typical places that you would share a video including YouTube.

I tried to install TechSmith Capture on my Windows computer this morning. Unfortunately, the installation kept timing out when I was prompted to sign into my TechSmith/ Screencast.com account. I was, however, successful in getting TechSmith Capture to run on my Mac.

Applications for Education
Like any screencast recording tool, TechSmith Capture can provide you with a convenient way to create short instructional videos for your students. Screencasting tools can also be helpful to students to explain in video format any problems they're having and need your assistance in solving.
at 10:01 AM
Share

TED-Ed Has Released Episode 9 of Think Like a Coder 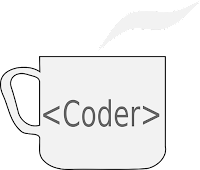 Think Like a Coder is a TED-Ed series of videos that my freshmen loved this this past year. The latest installment in the series was released yesterday. Episode 9 is titled The Factory.

Episode 9 continues to follow the main characters Ethic and Hedge having to solve a puzzle using the logic that a coder would use.

It's best to watch the series in order, but you can jump into any of the videos you'll still get a little lesson out of it.